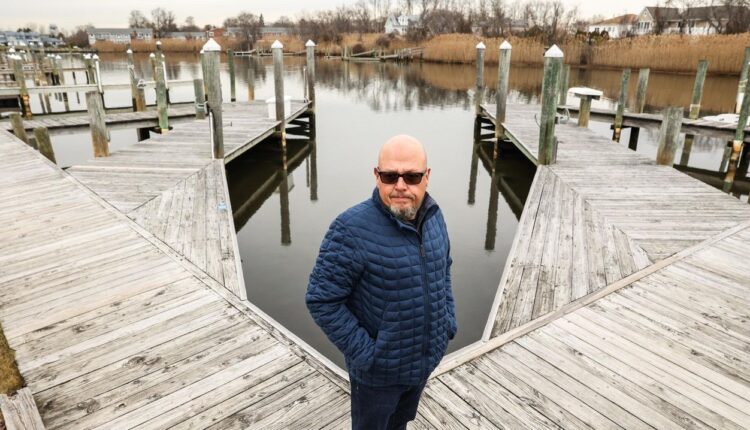 Joe Amodei said he and his wife Donna moved into a townhouse complex in Blue Point about two and a half years ago to enjoy the idyllic sunrises over the Great South Bay.

“We have all kinds of wildlife here,” he told Newsday. “A lot of birds.”

But this rustic beauty has been threatened by the antiquated cesspool system that serves the Amodeis and their neighbors at Blue Point Harbor.

Instead of repairing the system in the traditional way, residents of the 66-unit gated community are working with Suffolk County officials to connect the system to the Village of Patchogue’s sewage treatment plant.

The $2.4 million project will be funded in part by a $1 million grant from the county’s $125 million sewage infrastructure fund, officials said Tuesday.

“We’re not solving the water quality crisis unless we all work together to solve the problem,” County Executive Steve Bellone said during a news conference at the townhouse complex.

Amodei, 61, president of the port’s homeowners’ association, and J. Robert Holzmacher, a private engineer hired by residents, said the townhouses’ nearly 40-year-old cesspools are in danger of failing due to age and simple wear and tear.

The Patchogue facility, less than two miles away, is large enough to accommodate the Blue Point project as the village last year began expanding the facility by 50%, from a daily capacity of 800,000 gallons to 1, 2 million gallons. Village officials had begun inviting neighboring communities, such as Blue Point, to use the facility.

County Legis. Dominick S. Thorne (R-Patchogue) said the complex dumps about 17 pounds of untreated nitrogen into the ecosystem every day, causing algal blooms and other environmental hazards. Connecting the sumps to the Patchogue facility will remove about 6,000 pounds of nitrogen annually from groundwater and Tuthills Creek, which flows past the complex, Thorne said.

“We want to make sure we leave our children a better place than we found them,” he said.

Amodei, who has retired from the auto-collision industry, said construction of pipes connecting the existing system to the Patchogue facility should begin later this year and take about three months.

The homeowners association is taking out a loan to fund the remaining $1.4 million in project costs, Amodei said, adding the association is seeking state aid to pay off the loan.

At the press conference, Amodei said something he never thought he would say.

“It’s really exciting to get sewerage here,” he said.