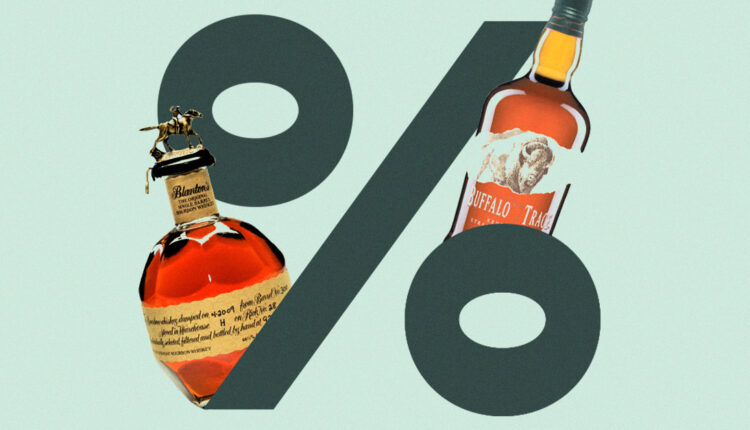 No doubt about it, Buffalo Trace Distillery is one of the best known in the whiskey world. As a leader in the category, it produces some of the rarest and most beloved products available and has cultivated a fanbase devoted to unique styles and distinct flavor profiles.

The core taste of every bourbon and whiskey lies in its mash bill, and while some bourbon brands fully disclose their recipes, the exact blends of Buffalo Trace’s range have remained a very well-kept secret. Although we don’t know the complete breakdown of each bourbon, there is some known information that allows us to decipher where the flavors for each begin.

Get the latest in beer, wine, and cocktail culture sent straight to your inbox.

Note: These are estimated amounts as Buffalo Trace does not disclose complete mash bill information.

Known as the “low-rye mash bill,” this is the most common and universal Buffalo Trace mash bill. It is thought to include 10 percent or less rye and can be found in many of the distillery’s base brands, such as Benchmark and namesake Buffalo Trace bourbon, thought is also used for highly regarded bottles like Eagle Rare 17 Year Old.

Mash bill #2 is commonly referred to as the “high-rye mash bill” and is known to contain 12 to15 percent rye. However, the term high rye is a bit misleading as it is often associated with mash bills containing 20 to 35 percent rye or more. Similar to mash bill #1, it can be found in both entry-level and highly coveted bottles. The most well-known brands made with mash bill #2 include Blanton’s Single Barrel, Ancient Age, and the rare Elmer T. Lee.

In this mash bill, wheat replaces the rye component of the recipe, giving its bourbons a smooth and slightly sweet taste. Pappy Van Winkle is the most notable Buffalo Trace brand containing the wheated mash bill, but it can also be found in coveted bottles such as EH Taylor, Jr., Seasoned Wood, and WL Weller Special Reserve.

This mash bill is said to contain no corn and is instead made entirely from rye and malted barley. With no added sweetness, this mash bill produces a flavor profile that is herbaceous and spicy. Of the Buffalo Trace brands, it can be found in EH Taylor, Jr.’s Straight Rye and Barrel Proof Rye bottles.

The four-grain mash bill is made from corn, rye, wheat, and malted barley and is found in only EH Taylor, Jr. Four Grain.

The amaranth mash bill includes heritage grain amaranth instead of rye in its makeup. It is based on mash bill #1, so the amount of amaranth averages 10 percent and is found only in EH Taylor, Jr. Amaranth Grain of the Gods.

Do Obesity and Obstructive Sleep Apnea Contribute to Sarcoidosis Development?