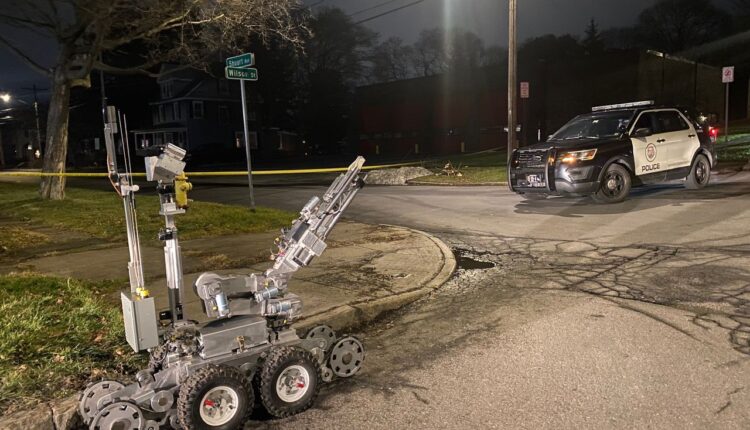 SYRACUSE, NY — A Syracuse man was taken into custody early Tuesday, more than 14 hours after barricading himself inside his home on Shuart Avenue, city police said.

An ambulance examined Gray around 12:30 p.m. Tuesday, shortly after the standoff ended.

Police were called to the Shuart and Teall Avenue area at 9:49 a.m. Monday when someone called 911 to report a man walking outside with a long gun. The area is not far from James Street and Teall Avenue.

Police later identified Gray as a suspect and said he went into his home and would not come out. The police kept telling Gray to come out on the front porch, hands up and unarmed. Sometimes he was seen on the porch, but would then pull himself back in and not come out.

Police issued a public safety alert and urged neighbors to take shelter until further notice. Roads in the area were also closed.

Every few minutes, officers would use a bullhorn-like device to ask Gray to please come out the front door, unarmed, with your hands raised and to follow the officers’ directions. Officials said they would not go.

Sometimes a woman’s voice could be heard through the megaphone asking Gray if he was okay and could he please come out on the porch.

Dozens of police cars, a crime scene truck, an armored vehicle, robots and a negotiator were all on hand to assist during the 14-hour standoff. Officers used the robotic devices to search the perimeter of the home at one point. A long battering ram attached to the front of the armored truck then pierced the front of the house. Neighbors said police also used tear gas late in the standoff.

It was after midnight Tuesday when Gray finally ran out the back of the house and was arrested, Malinowski said.

No one was hurt, but ambulance crews waiting nearby were examining Gray, Malinowski said. It wasn’t immediately clear if Gray would be taken to a local hospital or jail.

Bouncer dies days after being punched into coma by customer

The first tanker with LNG from the USA reaches Germany