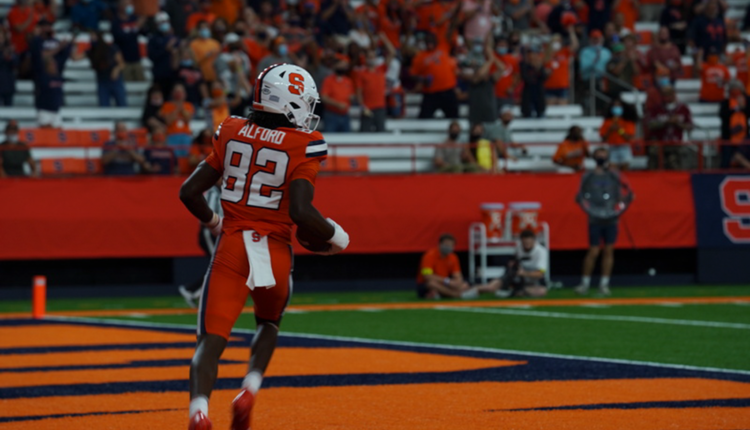 Alford caught 20 passes for 429 yards this season, both career-bests, and he finished third in yards on the orange. The Quebec native was one of Syracuse’s top over-the-top threats, scoring a 47-yard touchdown against UConn and a 58-yard touchdown against Boston College, helping the SU comeback beat the Eagles.

Last year, Alford appeared in all 12 games, made five starts and recorded 13 catches for 249 yards and two touchdowns. His last-minute 45-yard touchdown gave Syracuse a comeback win over Virginia Tech in October. As a freshman in 2020, Alford played in four games and caught a pass against Wake Forest.

Head Coach Dino Babers compared Alford on the Disney character “Bambi” last fall. The recipient is still developing their skills and learning from older players and coaches, Babers said. The manager added that Alford didn’t even know what he was capable of, but “hopefully” one day he did.

Alford didn’t focus on playing football until he was a sophomore in high school, but his rapid development allowed him to transfer to a Florida high school for his senior season. After high school, the recipient was listed as a 3-star recruit by 247Sports and had offers from Georgia, Florida, and Florida State, among others.

Syracuse is now without three of its top five wide receivers, with only Oronde Gadsden II and Trebor Pena. In total, Orange lost ten players to the transfer portal. The first player transfer window closes in just over a week.