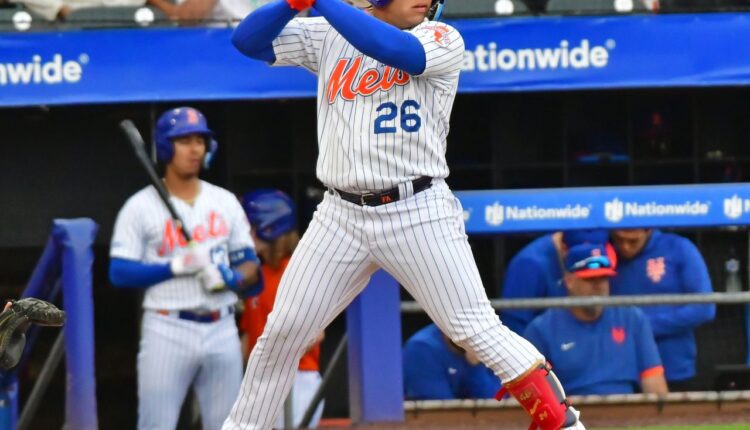 Allentown, PA – The Syracuse Mets snapped a three-game losing streak on Friday night, roaring out to an early lead and never looking back on their way to a 6-3 win over the Lehigh Valley IronPigs on a warm, summer evening at Coca -Coke Park. Francisco Álvarez homered for the second time in three games, and Connor Gray pitched six innings of one-run baseball en route to the win.

Syracuse (46-57) started his scoring early on Friday night, plating one run right away in the top of the first when Daniel Palka blasted a pitch over the right-field wall. It was Palka’s 18th home run of the season.

The Mets really gave themselves some distance in the third inning. Deven Marrero led off the inning with a walk, promptly moving up to second base on a sacrifice bunt from Terrance Gore. Nick Plummer brought home Marrero with a one-out double, his fourth hit in the last two games, giving the Mets a 2-0 advantage. That brought Francisco Álvarez to the plate, and the 20-year-old phenom did not disappoint. Álvarez pounded an offering way beyond the left-field fence, a two-run shot that made it 4-0 Syracuse in a flash.

Buoyed by early run support, gray flourished on the mound. Syracuse’s starter tossed one of his best outings of the season, allowing just one run in six innings on two hits with three walks and three strikeouts. Gray took a no-hitter into the fifth inning, befuddling IronPigs batters with a well-placed fastball and a sharp, biting curveball.

Lehigh Valley (57-46) did scratch across a run off of Gray in the bottom of the fifth inning. Josh Ockimey doubled leading off the frame, breaking up Grey’s no-hitter in the process. After a Chris Sharpe fly out, Rafael Marchan chopped a single up the middle that scored Ockimey and made it a 4-1 game. That would be the only run to come home against Grey, who induced a double-play ball to end the fifth and worked a 1-2-3 sixth to complete his outstanding start.

In the seventh, Lehigh Valley got a bit closer again on a solo home run from Jorge Bonifacio that made it a 4-2 game.

However, in the top of the eighth, Syracuse found the insurance it would sorely need with two runs that made it a 6-2 advantage. After a Plummer groundout to start the inning, Álvarez was hit by a pitch, and Palka singled to put two runners on base with one out. Travis Blankenhorn then came to the plate and did damage one more time, lining a single into right-center field to score Álvarez and move Palka up to third as the Mets took a 5-2 edge. Blankenhorn has hits in 42 of his last 52 games since May 12th, batting .340 during that time with 17 doubles. Nick Dini followed it up with another single to plate Palka and make it a 6-2 game.

It remained a 6-2 game into the bottom of the ninth when things got interesting very quickly. Michel Otañez struck out the first two batters he faced and then induced a groundball to third base that looked like it would end the game. However, JT Riddle made an error to extend the game. Otañez promptly walked the next three batters, bringing home a run, making it 6-3 and keeping the bases loaded with two outs. Rob Zastryzny was summoned from the bullpen to finally end the game and earn his first save of the season. Zastryzny did just that, striking out Will Toffey to hand Syracuse its first win of the series.

Syracuse continues its six-game series against the Lehigh Valley IronPigs on Saturday evening at 6:35 pm Right-hander Tim Adleman is slated to start for the Mets, opposed by right-hander Colton Eastman for the IronPigs.