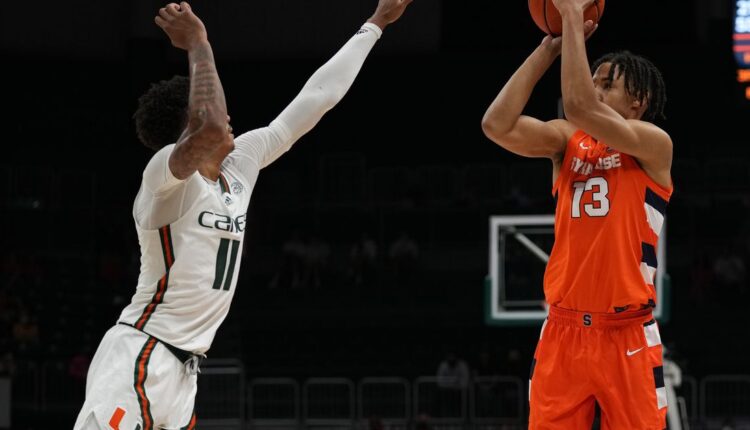 A quick turnaround has sent the Syracuse Orange men’s basketball team (12-6, 5-2) on their way south to take on the #16 Miami Hurricanes (14-3, 5-2) on the road Monday night. The Orange are looking for a surprise win on the road to earn their first win over a ranked opponent all season. With previous losses to Illinois and Virginia, Syracuse is hoping the third time is actually the stimulus.

Tip-off between the Orange and the Hurricanes is scheduled for 7 p.m. EST.

Here are our predictions:

There is some possibility for the Orange to create a road upset, especially if Syracuse catches Miami losing two of their last three games to Georgia Tech and NC State. Despite this, both teams have a short break, so expect some high-volume competition between both teams. If Miami can’t make the orange pay by three, Syracuse can keep this game close. On the other hand, if ‘Cuse gets off to a slow start, it will be difficult to come back against a Hurricanes team with multiple offensive creators that aren’t afraid to make mid-game adjustments.

It’s going to be an offensive game, so Syracuse should really try to push the tempo further. Jesse Edwards dominated the first meeting last year and I think Syracuse can be successful in putting the ball in the basket against Norchad Omier. On defense, the Oranges need to bounce back and stop Miami from throwing defenses where they can attack lane. The game could boil down to which center can stay out of trouble the longest.

The quick turnaround of both sides playing Saturday, combined with their ability to force turnovers (Miami is 2nd and SU is 3rd in steals in the ACC), means there should be plenty of alternating possession and frantic breakouts. The ‘Canes won the paint battle last time they faced the Orange, but this matchup looks more even with Jesse back. This seems like a case where ‘Cuse can play well across the board but fall short without an extra burst from perimeter shooting.

The problem Syracuse faces is that Miami has athletes. Much like last season, the Hurricanes can use this to their advantage to bully the orange off the ball and in the paint. Jesse Edwards’ absence massively hurt the Orange in the late-season contest between the two teams, and he still needs support to keep Miami out of the paint. Syracuse doesn’t do well when pressured, however, and the Orange doesn’t have the athletes to match Miami’s physicality.

Syracuse is catching up to Miami at just the right time as the Hurricanes have lost two of their last three, but I think this is a matchup for Orange seniors to capitalize on. The Hurricanes don’t shoot it that well from three and they’re not impressive from below, so Edwards should draw a little more attention. Also, Joe Girard tends to play very well against Miami, and Boeheim also gets better production from the forward. Maybe I’m drinking the Kool Aid and Miami’s offense is getting too hot to handle, but I’ll pick Syracuse in this case.

Who do you think will win this game?

Who will win the game between Syracuse and Miami?