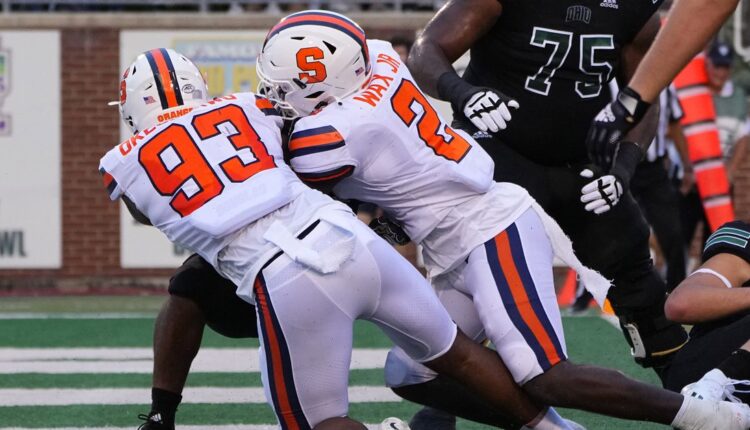 The Syracuse Orange defense will be without longtime regulars Garrett Williams and Mikel Jones next season as the two veterans hope to continue their careers in the NFL. Luckily, two respected mob members are back to lead the unit in 2023.

First up is DL Caleb Okechukwu, who has announced he will be returning to Syracuse for a fifth year:

Okechukwu was the most experienced member of the defensive line last season and it showed in the stats. Caleb led the orange with seven sacks, adding three extra tackles-for-loss, two forced fumbles and that clutch pick-six during the Week 3 win over Purdue.

The Washington, DC product is in its final year of eligibility.

By his side will be the new defense captain, Baltimore-born and bred LB Marlowe Wax:

Wax was a different breed than one of the primary linebackers. With Stefon Thompson injured in the very first game and losing for the season, Marlowe quickly established himself as SU’s go-to man in crucial situations. In addition to leading ‘Cuse with 88 total tackles, Wax had 4.5 sacks, 10.5 tackles-for-loss, two forced fumbles and two fumble recoveries.

The two DMV defenders are also an important part of the program off the pitch. They co-founded the Mob Podcast with Ja’Had Carter to give Syracuse fans a glimpse into player personalities throughout the season. Although Carter is sadly moving to Ohio State, these two seem determined to continue the podcast next season.

With two new corners out of the transfer portal and plenty of rising young talent forming the defense next year, it will be up to this dynamic duo to maintain the dreaded 3-3-5.