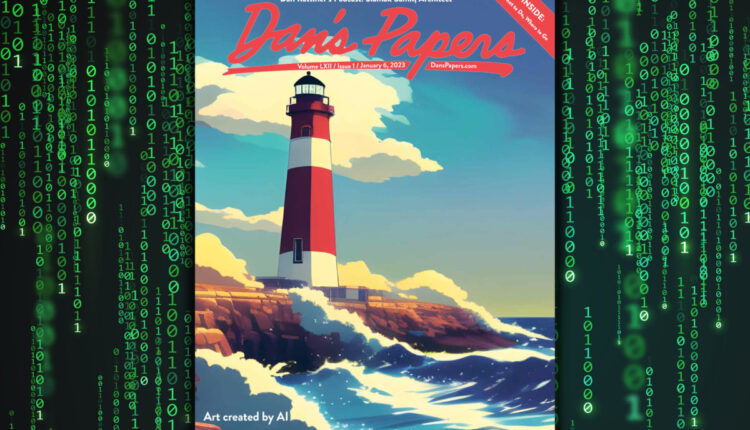 The era of AI art – digital paintings, drawings and photographs created by artificial intelligence – is upon us. Who could have imagined a time when an attractive, living piece of “original” art could be created simply by typing a few words into a computer? And at what price?

Featuring a version of the Montauk Lighthouse, this week’s cover of Dan’s Papers was created entirely by AI, but it feels a lot like many other covers we’ve released over the past 35 years.

Beginning with Elaine de Kooning’s painting in our September 11, 1987 issue, hundreds of artists have since enjoyed the pride and recognition that comes with having their work featured on our cover, but in a world where computers are now making art based on a few keystrokes inputted by a human being, what does that mean for the artists who once toiled in their studios for hours, days and weeks to create similar images?

While Dan’s has never had to pay the artists who make our covers, it’s clear how this growing trend could offer a company in need of artwork and illustrations an easy way to bypass hiring trained professionals to save money and time save by just playing around with a few word combinations to get something that’s “good enough”.

Artists all over the world are not happy about this. Some might argue that these artists are just whining about the impact burgeoning technology is having on their business, but the issue is more complicated. The moral and ethical implications are quite real, and their anger feels justified.

Learning how AI art is made is an important part of understanding the controversy that currently swirls around its use.

Without getting into a lot of jargon, here’s how the user experience works, at least for me when I created this Montauk Lighthouse cover photo: I logged into NightCafe Studio (nightcafe.studio), clicked the create button, and one of five selected creation methods, each using a different algorithm.

I have chosen the latest generator called “Stable” text-to-image AI art algorithm designed to create coherent images that obey the laws of physics. From there, I typed in “Montauk Lighthouse,” selected the “anime” style—one of 28 style options available—then clicked create. Less than a minute later I had a slightly different version of the image that now graces the cover of this newspaper for the price of half a credit (up from the initial 5 credits NightCafe gives users for signing up). After some deliberation we decided the waves should be bigger since this is supposed to be Montauk in winter so I clicked evolve this creation and added “big waves” to the original prompt so I had the last image you have see on our home page.

What happens on the computer side matters far more. When the AI ​​receives a prompt, it digs into a massive dataset, retrieves billions of images online, and assembles those images based on the inputs to produce an acceptable end result.

The problem with this lies in the images that the AI ​​uses. Beneath these images are billions of people’s personal photos, copyrighted works of art, and any other visual data circulating across the internet — and they’re being used without permission.

Some of the most popular AI programs, like the ones that create those artistic avatars that are popping up all over social media, even offer filters based on the work of specific artists. It’s no surprise that artists who show direct comparisons of their work to strikingly similar AI creations feel concerned and hurt.

Popular YouTuber Sam Yang of Sam Does Arts explains all of this fairly succinctly in a video titled Why Artists Are Fed Up with AI Art.

“If you shared your work online, or even pictures of yourself, your house, your surroundings, you may have been included in those records,” Yang points out, adding, “The moment we share them online, we have.” done it agreed to the system. If your work even only exists online, it will be found and used in an AI artwork.” I imagine that sooner or later the millions of AI-generated pieces will also be incorporated into these datasets, and the AI ​​will start basing its art on other AI art, further washing content away from its original source and giving us a treasure trove leaving behind watered down work that all start to look the same.

Despite all that, I have to admit that creating AI art is a lot of fun. I thoroughly enjoyed playing with various long, convoluted text prompts and evolving images based on added text, but I’m careful not to label this as my own art, and I wouldn’t attempt to sell it as such or to submit to a contest, as Jason Allen did with his AI-generated piece Théâtre D’opéra Spatial, which took first place in the Digital Art category at the Colorado State Fair last fall and helped generate criticism and discussion about Bringing AI art to the fore.

Of course, there is a place for AI to be deployed, but finding the best way forward where it will help the art world and not impact individual artists’ livelihoods may take time.

Within its own bubble, a site like NightCafe Studio features fun, themed competitions and gives users credit for submitting work, voting for others on daily challenges, and completing milestones such as:

But it would be a bit illusory for so-called “AI artists” to fully appreciate the things they create with these tools.

For Oliver Peterson’s actual artwork, created with his own two hands and occasionally a computer, see @oliverpetersonart or @oliversees on Instagram. He’s also quite worried about AI journalists taking over his job. Know before you go: Thursday, Jan. 5