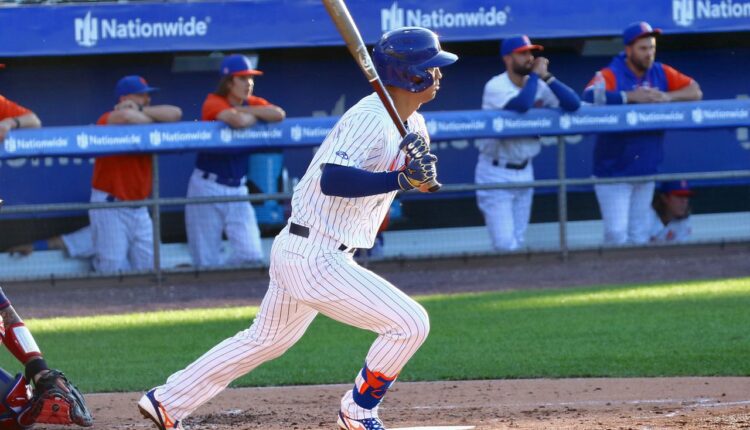 Worcester, MA – It took ten innings, but the Syracuse Mets got the job done at Polar Park on Friday night as the Mets outlasted the Worcester Red Sox for a 6-5 Syracuse win, kicking off the post-All-Star break portion of the schedule in style. Syracuse has just 59 games remaining in the 2022 regular season after Friday night’s victory.

The game entered the tenth inning tied, 4-4, when the drama only continued. In the top of the tenth, Kramer Robertson started at second as Syracuse’s free runner with nobody out, still standing on the bag after Álvarez struck out. A Plummer walk put runners on first and second with one out, followed by a Khalil Lee groundball to first that looked like it could be an inning-ending double play. However, Grant Williams threw the relay throw back to first base errantly into the first-base dugout, allowing Robertson to scamper home and make it a 5-4 game. The next batter, a pinch-hitting Mark Vientos, lined a single into center field that scored Lee, who had advanced to second on the throwing error, and made it a 6-4 cushion that would prove to hold up in the bottom of the tenth.

Yet, it wouldn’t come easy. Mets reliever Bryce Montes de Oca entered the game looking for his fifth save opportunity in as many chances in Triple-A. Devlin Granberg began the frame at second as Worcester’s free runner. Connor Wong and Triston Casas both flied out, giving Mets fans hope that this would be a comfortable ride to the finish line. It would not be. Granberg scored on a passed ball and Hernández singled, putting the tying run on first base with two outs in the 6-5 game. Johan Mieses then walked, and Jaylin Davis was hit by a pitch, loading the bases with two outs in a one-run game. Ryan Fitzgerald came to the plate with the chance to be a hero, but Montes de Oca had other ideas, inducing a weak groundout to end the game and hand the Mets a pulse-pounding, 6-5 victory.

Syracuse (41-50) plated the game’s first run in a big way when Gosuke Katoh launched a no-doubt home run over the 22-foot-high right-field wall to push the Mets out to a 1-0 lead in the bottom of the second inning. Katoh now has six home runs in Triple-A this season, five of which have come in his past 13 games.

After an anemic start to the game at the plate where the first 10 WooSox batters failed to record a hit, the fortunes for Worcester (47-44) changed quickly in the bottom of the fourth. The home team had a Triston Casas on first base with two outs when the drama began. Consecutive singles from Ronaldo Hernández and Christin Stewart plated Casas and knotted the game up at a run a piece. Casas, a top-15 prospect in the sport according to MLB Pipeline, was making his return from the injured list on Friday night. The 22-year-old had not played since mid-May due to a high ankle sprain.

It remained a 1-1 game into the top of the sixth, as Red Sox starting pitcher Jay Groome allowed just one run in his first five innings of work with five strikeouts. The sixth would prove to be his demise. Terrance Gore began the inning with an infield single, and Kramer Robertson walked to put runners on first and second with nobody out. Then, Francisco Álvarez lined a missile of a line drive off the base of the center-field wall, plating Gore for a 2-1 Mets edge and moving Robertson to third with nobody out. Álvarez’s line-drive double was clocked at 110 miles per hour off the bat.

The Mets production in the sixth didn’t end there. The very next batter, Nick Plummer, lined a soft single into left field that scored Robertson and Álvarez to make a 4-1 game in a flash.

It looked like the Mets would make it an even larger lead in the seventh, loading up the bases with one out. However, successive strikeouts left the bases loaded and almost came back to doom Syracuse.

From there, Worcester chipped away and eventually tied the game. In the seventh, the WooSox scored twice on an RBI single from Nick Sogard and an RBI fielder’s choice from Grant Williams, cutting the Syracuse lead to one, 4-3.

In the eighth, a Connor Wong leadoff single was followed by a Hernández RBI double that knotted the game up, 4-4. However, Syracuse navigated the choppy waters in those two frames, keeping the game tied by stranding a combined three runners on base. All of those runners were stranded in scoring position.

Syracuse continues its series at Worcester on Saturday afternoon at 4:05 pm Right-hander Connor Gray is slated to start for the Mets, opposed by right-hander Brian Keller for the WooSox.

Vienna Man Accused Of Having Sexual Contact With Underage Girl