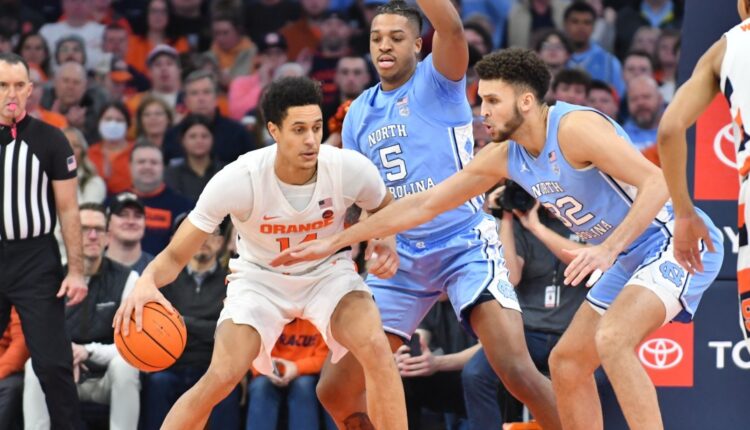 Syracuse fell 72-68 to North Carolina Tuesday night at the JMA Wireless Dome. With the loss, the Orange falls to 13-8 (6-3) on the season. Next up is a road game at Virginia Tech on Saturday.

Mistakes by Syracuse and the officials took center stage in the final minute. Syracuse led 68-66 after a Joe Girard three-pointer 1-23 to the left. After the Orange got a critical defensive stop, a floater by Judah Mintz swerved in the lane, giving North Carolina a chance to tie. Armando Bacot got the ball underway and passed to a slashing Pete Nance, who was fouled by Jesse Edwards to prevent the dunk.

Nance made the first free throw but missed the second. The ball bounced and went wide, but Girard dived to save it. His rescue attempt ended with a pass straight to Nance for a go-ahead layup with 21 seconds remaining.

Mintz then went the length of the court to try to give Syracuse back the lead but was out of control on his drive and demanded a charge. However, officials called it a flagrant for leading with his elbow, despite his elbow tipping over as part of a normal basketball game. The flagrant meant North Carolina got two free throws and the ball.

After taking one of two free throws, Judah Mintz was called out for a foul on the inbound pass, despite Caleb Love clearly knocking him down before the pass. It should have been an offensive foul and Syracuse’s ball three by 10 seconds. Instead, North Carolina froze the game at the free throw line.

The game was tight throughout, although Syracuse didn’t take the lead until the second half. The Orange committed 16 turnovers, resulting in 21 Tar Heels points. Another important aspect was the discrepancy in the free throw. North Carolina had 23 tries compared to just three for Syracuse, despite Orange scoring more in the paint (38 to 34).

Nance led all scorers with 21 points. Girard finished at 18 to lead Syracuse along with five assists and four rebounds but turned it over six times. Chris Bell had 15 points on 6-9 shooting, along with four rebounds. Mintz added 17 points, two assists and three steals.