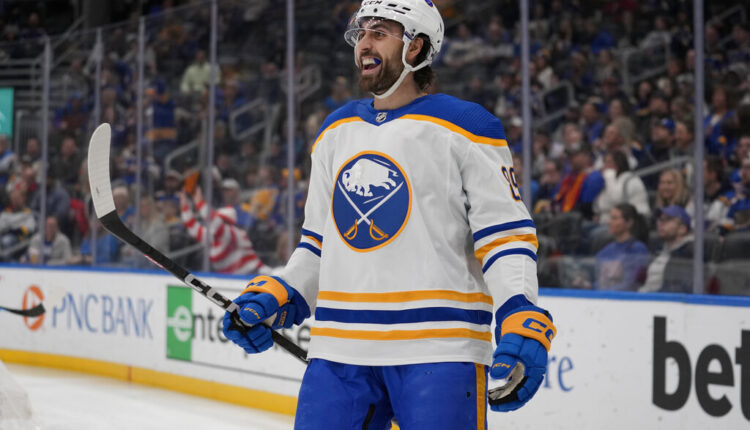 ST. LOUIS (AP) — Tage Thompson and Jeff Skinner each had a goal and two assists as the Sabers beat the Blues 5-3 Tuesday night.

Thompson’s 33rd goal extended his points streak to five games, his third streak of five or more games this season. It was also his ninth game of the season with three or more points. Skinner also has a five-game points streak, his second such stretch this season.

Alex Tuch had a goal and an assist, and Owen Power and Dylan Cozens also scored for the Sabers, who were on a nine-game losing streak at St. Louis through January 21, 2012.

Ukko-Pekka Luukkonen made 26 saves for Buffalo, improving to 11-2-1 in their last 14 away games.

The Sabers continue their road trip Thursday in Winnipeg.

Ivan Barbashev, Brayden Schenn and Jordan Kyrou scored for the Blues, who finished 4-3 in their longest home game of the season. Jordan Binnington made 26 saves.

Skinner put the Sabers ahead after 60 seconds. Thompson created the opportunity by snatching the puck from Tyler Pitlick in front of the Blues’ net and feeding Skinner.

Power made it 3-0 midway through the first period, scoring after a perfect backdoor feed from JJ Peterka.

Thompson scored with a backhand in the second second after 70 seconds.

Back-to-back goals from Barbashev and Schenn in the second game enlivened the Blues. Defenders Torey Krug and Justin Faulk assisted on both goals.

Kyrou’s goal from high position in the 47th second in the third reduced it to 4-3.

The Blues had a 6-on-4 after Peyton Krebs was called up with 1:46 left due to a faceoff injury, but Cozens’ empty net with a minute remaining sealed it.

Hochul under pressure to increase funding for roads and bridges | News, Sports, Jobs