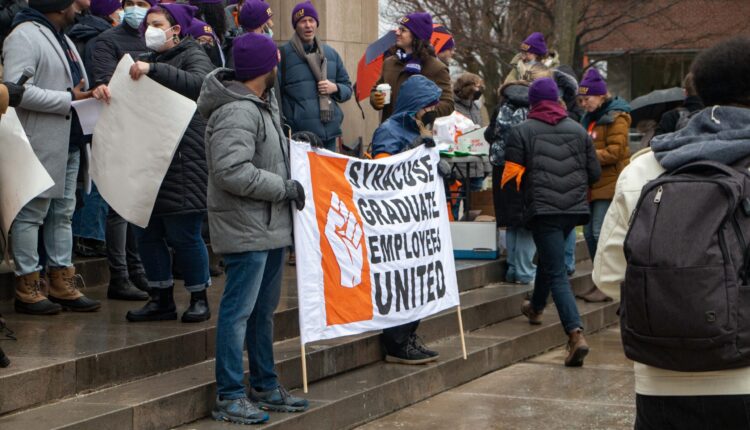 When student workers organize to form a union, Amanda Beavin, SGEU organizer and public affairs graduate student, said they can achieve official recognition — which requires employers to enter into negotiations with the union — one of two ways: Either the Institution employing them elects to recognize the union voluntarily or holds an election to obtain legal recognition.

Here’s how the process of organizing and gaining official recognition for student unions works and what the next steps for SGEU might be.

After receiving signed IDs from a simple majority of college graduates on campus, the union will begin the process of recognition, according to the SGEU website.

Beavin said the group plans to approach SU to formally request that the university recognize them as a union, effectively opting to enter into negotiations or “collective bargaining” with the group.

Ideally, Beavin said, SU would agree at that point, and the process for official recognition would end there.

“We are so confident that they will work with us through this process and do the right thing in the process. Just reach out to support and then ask, we want the union and administration to say yes and that’s always the best way to go if possible.”

If SU, like BU, Yale and Northwestern, does not voluntarily recognize the student union, Beavin says SGEU will hold an election through the National Labor Relations Board.

She said the union had already achieved majority graduate support at SU, surpassing the 30% threshold required to submit an election to the NLRB. In the event that SU decides not to voluntarily recognize SGEU, the union will request an election and set a date for it to be held on campus.

The SGEU would need a simple majority of votes in the election to be recognised.

According to Beavin, before an election can take place, a student union must undergo an application process with its affiliated college or university, in which the union and employer work together to decide who can vote.

At SU, she said that because student employees have different statuses and circumstances — some are semi-funded, paid by the hour, or supported by grants — this period will mean going back and forth with SU to decide who will be a graduate student Employee counts for the purposes of the election and is therefore entitled to vote.

SGEU will host a ‘teach-in’ on Monday at 6:30pm in the HBC Kittredge Auditorium to improve the education of SU students and faculty about the history of the campaign and what unions do and how they work said Beavin. The event is open to graduate and undergraduate students as well as other members of the SU community.

Bills’ Stefon Diggs, frustrated with Josh Allen on the touchline, storms out of dressing room after loss: report