Syracuse comes short of excitement, falling 56-54 to No. 6 NC State 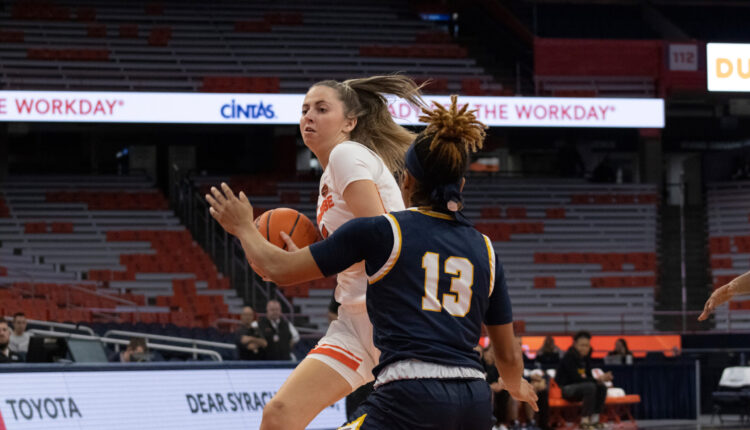 Syracuse had forced a jump ball with 3.9 seconds remaining. It trailed NC State 55-54 with a chance to upset the nation’s No. 6 team.

The game was there – Dariauna Lewis wrapped to the back of the hoop – but Teisha Hyman’s crosscourt inbound pass was just a little too powerful for Lewis to box. NC State would go 1-of-2 off the free-throw line on the following free throws after a Syracuse foul for a 56-54 win on New Year’s Day.

The Orange (10-4, 1-2 Atlantic Coast) fell to the Wolfpack (12-2, 2-1 ACC), SU’s first ranked opponent this season. Georgia Woolley led all scorers with a season-high 23 points. Dyaisha Fair added 14 while no other Syracuse player scored more than four points. Hyman was kept scoreless in a game against Michigan State for the first time since December 20, 2019.

Woolley scored the opening basket with a layup to give Syracuse a 2-0 lead, but after that the Oranges would not see the lead until the third quarter. The Wolf Pack built a lead of up to 12 in the opening period, capitalizing on an 11-0 run to take a 17-5 lead. But the Oranges cut the gap to seven going into the second quarter, where both teams were even as NC State led 34-26 at halftime.

The Orange switched in the third quarter and outplayed the Wolfpack 23-6. NC State shot just 2 of 14 and missed on all five 3-point attempts during that period. NC State entered the game as the sixth-best 3-point shooting team in Division I, according to Her Hoop Stats, but went just 2 of 17 from the deep on Sunday.

After trailing 36-26 early in the third quarter, Syracuse responded with a 10-0 run to get back in the game and ended with Woolley catching a pass and one on the fast-break layup goal scored. And after Asia Strong scored a 3-pointer with 32 seconds remaining in the quarter, the Orange had developed their widest lead of the game by nine, leading 49-40 into the fourth quarter.

In the first eight minutes of the fourth quarter, it was the polar opposite of the third. Syracuse only managed five points in the last 10 minutes. And it didn’t score a single point in time until Alaina Rice dumped a middle-distance jumper with two minutes to go. NC State got a couple of buckets from Camille Hobby, who led the Wolfpack by 12 points. Madison Hayes notched one of the two NCSU 3-pointers to put them at 51-49.

With 17 seconds left, NC State missed a layup and Woolley scored the rebound. Syracuse trailed 55-53. It went to his best player at Woolley on Sunday. Woolley drove down the left side of the lane and forced a foul. She managed the first but missed the second.

Instead of making a foul, the Wolfpack called a time-out to advance the ball. After several timeouts from both teams, Syracuse gushed from NC State and forced a jump ball with 3.9 seconds left, but Lewis’ outstretched hands failed to get a firm grip on the ball as NC State exited the Dome with their sixth straight win over the Orange though he’s getting upset almost for the second time in a row.

10 things to do on the North Fork this January

Man criticially injured in double hit and run in Queens