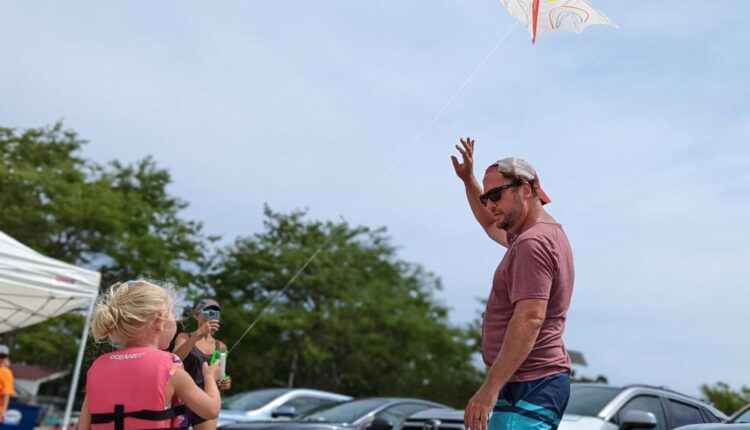 “We have a good time,” Rodney Johnson, also known as “Rodney the Sandman,” said as he prepared piles of sand for his sculpture.

He spent hours recreating the shark from “Jaws,” with the shark’s head erupting out of the beach, sandy maw agape.

The day was put on by the Onset Beach Association. Volunteers helped sell kites, point families toward the nearby story walk and hand out sandcastle-making equipment.

North End resident Ned Shamon was the first kid to design his own kite at the event. Armed with plenty of markers and a blank kite, he got to work filling in shapes of purple, yellow and green across his soon-to-be-airborne creation.

His dad, also named Ned, said they heard about Family Beach Day in a Boston Globe article and decided to make the trip down to enjoy the day.

Some beachgoers came from even farther away to play in the sun and sand; the Murphy family drove three hours from their home in Albany, New York, to have fun in Onset on Saturday, father John Murphy said.

Four-year-old Isla Murphy designed her own kite too, covering it with her name and drawings of rainbows. Giggling with glee, she took her kite to the sky with help from her parents.

Along the sidewalk near the Onset Bay Center, families strolled by a temporary story walk. Posts anchored in the sand were adorned with pages from a picture book about shells, which inspired some to go looking for beach treasures.

Linda Milne took her family along the story walk, reading aloud while pointing to each line for her grandson, 2-year-old Oliver Jerome.

After learning about all the different kinds of shells on the beach, Milne said they would grab some buckets to find shells of their own along the sandy shore.