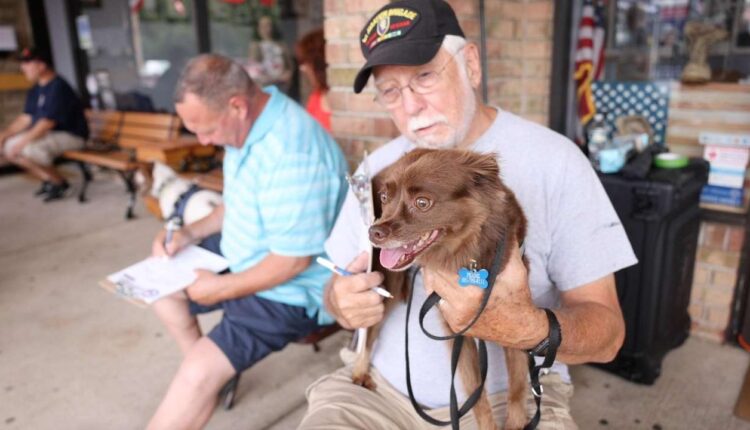 Suffolk County Sheriff Errol D. Toulon Jr. says he aims to protect all the county’s residents — including four-legged ones.

So on Friday, he launched a free microchip program that can help reunite owners with lost pets.

The program is being undertaken in conjunction with Paws of War, a Nesconset-based nonprofit that provides dogs and veterinarian services to veterans and first responders. They held the first of three free clinics as part of a “Dog Days of Summer” initiative.

Veterans and first responders get priority, but anyone can sign up.

“We see way too many heartbreak stories about animals that are not chipped and wind up being euthanized” at shelters after they get lost and are turned in, said Robert Misseri, founder of Paws of War. Owners sometimes later find out that “had it been chipped, that animal would have been saved.”

The group is providing free microchips that are inserted into animals by its staff. Information on the pet is then entered into a “Lost Pet Network” database. If someone finds a lost pet, they can take the animal to a veterinarian or a pet store, where it can be scanned for a chip. Then the owner is contacted.

“Many people fail to realize how valuable a microchip can be, and we also forget how quickly an animal can break away, get away,” Misseri said.

Toulon, who launched the Lost Pet Network three months ago, noted “a lot of families, especially in the post pandemic era, really relied on and got closer to their pets.”

He said sheriff’s officers will be notified through the system if a pet is missing, and while they won’t go out searching for the animal — human criminals remain the priority — they will keep an eye open if it is in their sector.

Bill Leonhardt, 76, a Vietnam veteran from East Patchogue, showed up at the clinic to get his recently acquired rescue dog, named Frank, a microchip.

“I think it’s a good thing to do,” Leonhardt said. “I try very carefully not to have him get out. He’s pretty good and well behaved except if he sees a dog that he’s not happy with he’ll chase him, and he’s really fast.”

“So having a microchip is kind of a good feeling to know that it’s help in getting him back if for some reason he gets separated,” he said.

Leonhardt said the insertion of the microchip went smoothly.

“He was better than I expected. They stuck the needle in him and he didn’t even flinch,” he said. “He was more upset with just riding in the car.”

The next free events are Aug. 11 in Yaphank and Sept. 17 in Patchogue. Registration is required at www.pawsofwar.org.

Bart Jones has covered religion, immigration and major breaking news at Newsday since 2000. A former foreign correspondent for The Associated Press in Venezuela, he is the author of “HUGO! The Hugo Chavez Story from Mud Hut to Perpetual Revolution.”

Syracuse coasts to 9-4 win over Omaha on Friday Night