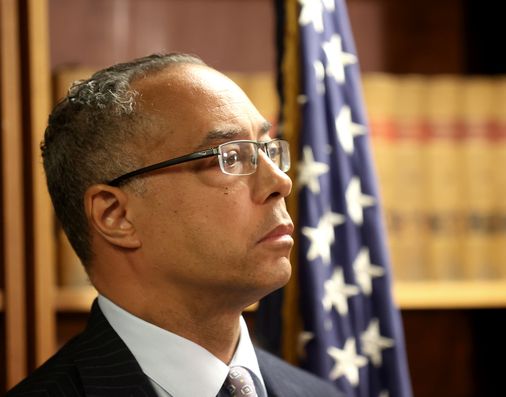 Suffolk District Attorney Kevin R. Hayden on Monday faced questions, criticism, and calls for an outside probe after a Globe investigation exposed a coverup by transit police officers and raised questions about how prosecutors handled the case.

Former Boston Mayor Kim Janey, also an Arroyo supporter, tweeted that she was “deeply disappointed” in how Hayden’s administration handled the case.

“This is a breach of trust and we deserve a DA who will build trust,” Janey said.

Hayden and Arroyo are set to face off in the Democratic Primary Sept. 6. Both men are vying for a full term as Suffolk District Attorney, which handles criminal cases in Boston, Chelsea, Revere, and Winthrop.

In a statement Monday, Hayden’s office dismissed the calls for his resignation.

“We’re not taking seriously any political theatrics calculated to benefit Kevin Hayden’s opponent,” the statement said, adding, “When you get past the accusations in this story all that remains is the fact that this case remains open and active.”

In calling for Hayden to step down, Arroyo said: “Faith in the integrity and fairness of the Suffolk County District Attorney’s office is essential to its ability to serve the public and solve crimes,” Arroyo said. “Mr. Hayden has irreparably damaged that faith and should resign.”

The controversy follows a Globe report on Sunday that examined how Hayden’s office allegedly tried to squash a troubled case instead of prosecute. In April 2021, Jacob Green, a white transit officer, was accused of pointing his gun at a Black man during a traffic dispute.

Green was off duty, but summoned other officers to pull the man over. Then he wrote the man a ticket himself.

Green filed two police reports, while a friend on the force filed a third, each of which were false, according to Transit Police officials. Transit officials brought the case to then-Suffolk DA Rachael Rollins, who launched an investigation. But when Hayden became DA, transit officials and Green’s attorney allege Hayden’s office moved to dump the case. Hayden denied that allegation, and provided a series of shifting and contradictory explanations for what happened.

On Monday, Iván Espinoza-Madrigal, the executive director of Lawyers for Civil Rights, also voiced his displeasure in how the case was handled.

Your Stories Q&A: Will the JetBlue return nonstop flight from Syracuse to Orlando?