Suffolk County Police rescue a hunter after a kayak capsizes 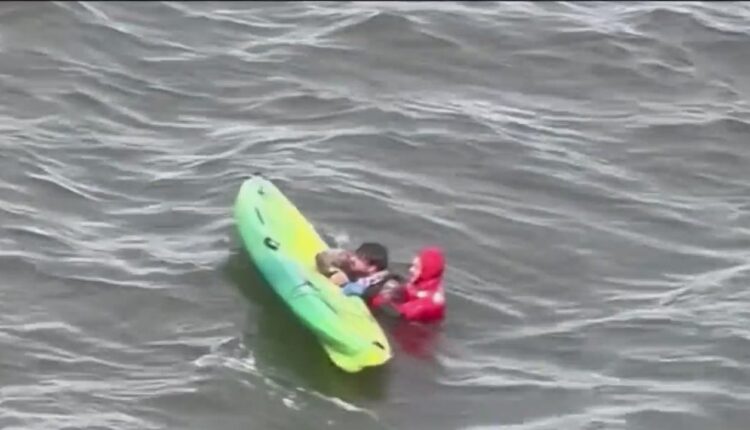 Suffolk Count Police rescued a man from the water in Narrow Bay after his kayak capsized on Sunday morning.

The swift rescue operation by Suffolk Police was captured on camera by the helicopter hovering overhead.

The hunter, 34-year-old Nick Shakalis, was out duck hunting on Sunday morning when the kayak he was in capsized and was immediately submerged in 40-degree water.

“Before you know it, I was in the water,” he said. “I came back – nice, slow and gentle. Out of the blue, just slipped in. I think it was a strong gust of wind.”

Luckily, family and friends who were with him on shore quickly called 9-1-1.

“With water like that, after about 20 minutes in the water, a person can’t help themselves,” said Sgt. John Vahey, command pilot with the Suffolk County Police Department. “We were approaching the critical period.”

A rescue team was on him within minutes as Nick was holding on to his kayak with his life jacket wrapped around him.

“He wasn’t as alert, he wasn’t as responsive,” said flight paramedic Erin Cary of Stony Brook University Hospital. “It was really a matter of minutes before he was well.”

“The only thing he said while I was in the water hit me — he said ‘help me,'” said police officer and lifeguard Jonathan Jensen. “I got sandwiched between him and the kayak and we made our way to the island.”

Nick was taken to a nearby hospital where he was treated for hypothermia.

Speaking to FOX 5 NY by phone on Monday as he juggled his first day at a new job, he said that while the capsize wasn’t the craziest thing that’s happened to him, it was definitely something to add to the list.

Nick plans to reunite with the team that saved his life. Though there’s no way he can repay her, he says the least he can do is say thank you.