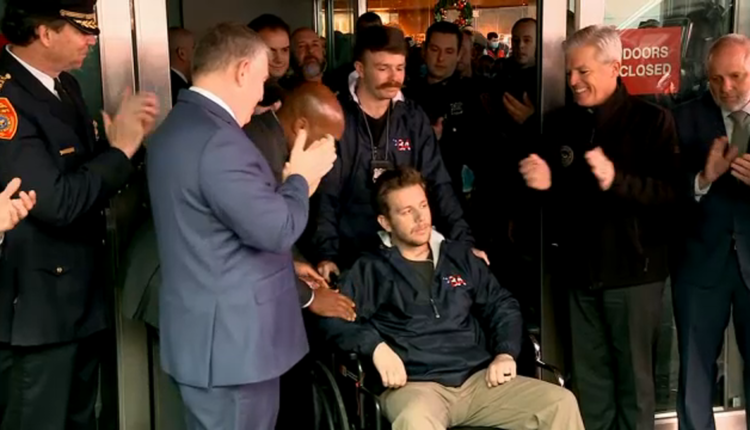 Hundreds of Suffolk County police officers lined the hospital exit on Friday morning to greet their colleague, who was wounded when a man stabbed him in the neck.

Officer Raymond Stock, 26, emerged from Stony Brook Medical Center on Friday and was pushed by colleague Brendon Gallagher, 28, who was also stabbed in the same attack and discharged from hospital last week.

Stock’s surgeon credited rescuers with saving the 26-year-old’s life, as well as the officer’s own training and personal will to survive.

Stock has been on the job for less than a year and doctors say he was lucky to survive his injuries.

Stock was lucky the hunting knife missed his femoral artery, but it pierced through his neck and into his chest, paralyzing one of his vocal cords.

“Despite all the blood he lost at the scene, his fortitude, he got here alive,” Vosswinkel said.

Stock, who will soon be a father, will continue his recovery at home.

Officers responded on Dec. 28 to an apartment where suspect Enrique Lopez violently attacked his roommate and threatened him with a fire extinguisher, police said.

When police arrived at the scene on Birchwood Road, Lopez, 56, pulled out a knife and stabbed both officers.

Officials say at least one of the officers was able to fire his gun at Lopez during the incident. Lopez was pronounced dead at the scene.

The suspect spent two years in prison after being arrested in 2011 for assaulting an officer, officials said.

Both injured officers are Army veterans who served in Afghanistan.

A third officer, who was also at the scene, was also taken to the hospital and was treated for non-life-threatening injuries. Officials said he had since been released.

The Pipeline from Torrence to Syracuse