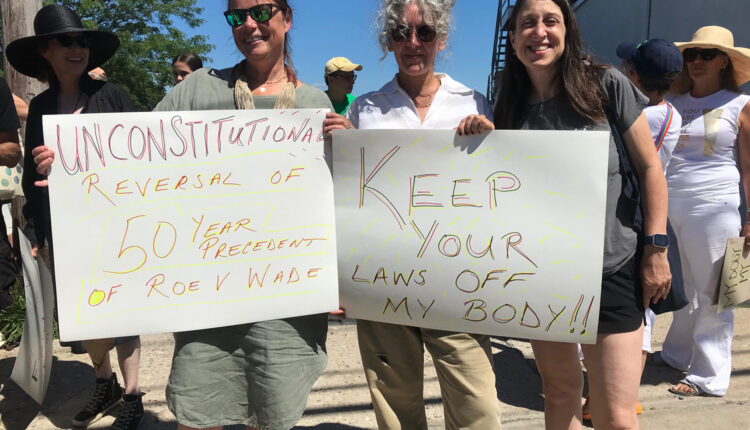 Signs of the times. Three women at the recent abortion rights march in the Center. (Credit: Susan Carey Dempsey)

Every semester in my Investigative Reporting class I show Edward R. Murrow’s famous TV documentary about the plight of migrant farm workers titled “Harvest of Shame.”

At the start of it, a black farm worker in the field is interviewed and is asked how much money she’ll earn for a day of picking beans. The amount it outrageous: $1. Then she is asked how old she is — she says 29 — and how many children she has. She says 14, and students in the SUNY Old Westbury class gasp.

And I need to put the 1960 documentary on pause and explain that it was made before legalized abortion, when also avenues of birth control were outlawed in the United States.

The decision two weeks ago by the arch-conservative majority now on the US Supreme Court overturning the Roe v. Wade decision of 1973 legalizing abortion in the US — and what the majority could do next — will return this nation to a time like that.

As Vice President Kamala Harris and others are warning, the overturning of Roe v. Wade is a start. “I definitely think this is not over,” Ms. Harris told CNN in an interview last week. She pointed out that Justice Clarence Thomas said “out loud” in his concurring opinion that the Supreme Court should also reconsider other decisions including contraception.

A Supreme Court decision involving Bill Baird, a one time Suffolk County resident, was at the base of the Roe v. Wade decision. Students at Boston University had sent Mr. Baird a petition asking him to take on the Massachusetts’ “Crimes Against Chastity, Decency, Morality and Good Order” law.

In 1967, he gave a presentation at the university attended by 1,500 students. He gave a female student a condom and a package of contraceptive foam. He was arrested, convicted and jailed. His Supreme Court challenge to the Massachusetts law was titled Baird v. Eisenstadt (for Thomas Eisenstadt, the sheriff of another Suffolk County, in Massachusetts).

Justice John J. Brennan Jr. wrote the decision that held it was legal for an unmarried person to be provided contraception and declaring: “If the right of privacy means anything, it is the right of the individual to be free from unwarranted governmental intrusion into matters so fundamentally affecting a person as to whether to bear or beget a child.”

Mr. Baird lived in Centerport, but after death threats and the firebombing of one of his birth control/abortion clinics on Long Island, he lived anonymously in another state. He told me last week: “The demolition of Roe v. Wade doesn’t want to stop abortions. What it will do is stop desperate pregnant women from accessing safe reproductive healthcare. In 1963, when abortion was a crime, an African American unmarried mother of nine died in my arms at Harlem Hospital. A wire coat hanger she used in an attempt to end her pregnancy was imbedded in her uterus as she lay in a pool of her blood. At 90, I have been fighting for these rights for almost 60 years. My US Supreme Court case, Baird v. Eisenstadt, legalized birth control — a decision that may also be reversed along with other right to privacy cases such as gay rights.”

“The ongoing holy war in our country,” said Mr. Baird, “violates the wall separating church and state. It abuses the rights of women to protect their health and lives especially in underserved areas. Since the Roe decision, anti-abortion leaders have relentlessly attacked on every front. They are forcing Americans of different faiths and non-faiths to adhere to their fundamentalist beliefs. It will take a tidal wave of progressive activism to restore and protect these human rights. The most important area to focus on is voting and supporting progressive candidates.”

“This fall, Roe is on the ballot,” President Joe Biden said after the overturn of Roe v. Calf. He called it a “tragic error.” Mr. Biden said: “Today the Supreme Court of the United States expressly took away a constitutional right for the American people. They didn’t limit it; they simply took it away.” The ruling puts the nation on an “extreme and dangerous path.”

“Voters need to make their voice heard,” said Mr. Biden. “We must elect more senators and representatives who will codify a women’s right to choose once again.” He emphasized that “with your vote, you can act. You can have the final word. This isn’t over.” Overturning Roe v. Wade is at odds with poll after poll showing continued public support for the 1973 decision. Moreover, the move by the arch-conservative justices violates a centuries-old legal principle that judges should defer to past interpretations of statutes and the Constitution, to honor precedent. This is called stare decisis, Latin meaning “to stand by things decided.” Further, it undermines this Supreme Court’s already quickly-falling legitimacy.