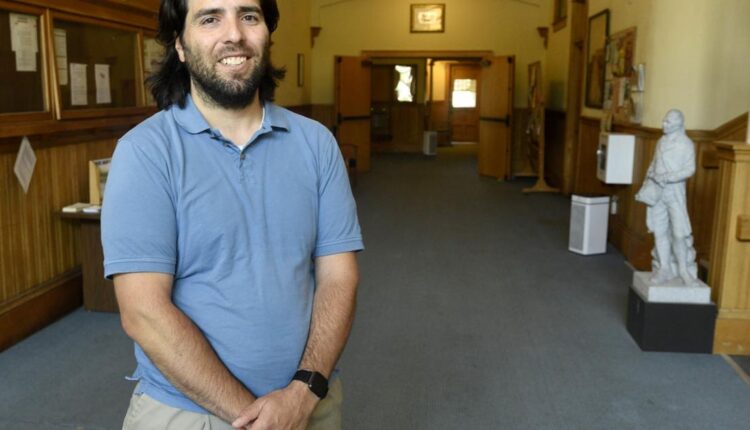 BARRE — Nicolas Storellicastro didn’t think twice about accepting the job as Barre’s new city manager and any nervousness he felt when he started work last week was washed away when he opened his first “official piece of mail.”

One, Storellicastro says was waiting for him — complete with a personal note from Judith Miles, who lives in a nearby nursing home.

“What a lovely thing and to me it was just a nice ‘welcome,’” says Storellicastro, who has felt nothing but welcome in Barre since he traveled from his former home in New York City to interview for the job back in May.

So says the man who is now settling into the office Steve Mackenzie occupied for 12 years.

Once dominated by the coordinated clutter for which Mackenzie was famous right up until his recent retirement, the office with the steam-cleaned carpet and the fresh coat of paint — the color is “zen,” according to Storellicastro — is still a work in progress .

The clutter is gone, the walls are bare, the bookshelf is mostly empty and the only paper in sight is neatly stacked on desk with a mostly visible polished surface and that card from Miles.

Storellicastro says he’s not looking to replicate Mackenzie’s unique filing system, but knows there is an avalanche of paperwork coming his way and the sterile look won’t last.

Expect family photographs — including his wife, Allison, who picked the “zen” paint and their two young sons, Maximo, 8, and Sonny, 6, to be hung before long. They will be joined on the office walls by artwork reflecting the communities — New York City and Albany, New York. before that — where Storellicastro, 39, has spent almost all of his professional career. Argentina, where Storellicastro was born and still has extended family, will no doubt be represented in his evolving office, as will Colorado, where his family moved when he was seven, and he took his first job in government after graduating from Colorado State University.

Storellicastro says he’s looking to add something local to the mix.

“I want something ‘Barre’ in here,” he says, predicting that shouldn’t be difficult based on his recent tour of Studio Place Arts.

So who is Nicolas Storellicastro?

For starters he was born Roberto Nicolas Storelli-Castro, the son or Roberto Storelli and Liliana Castro. In a nod to his now-deceased dad he has always been called “Nicolas,” and the hyphen in his last name was dropped when he got married to avoid confusion about his wife’s maiden name.

Storellicastro’s “let’s make it one word” solution with respect to his once-hyphenated last name reflects the flexibility and problem-solving that should serve him well in a job that is exactly the kind he had in mind when he earned his masters of public administration degree in local government from the State University of New York at Albany.

The economy was tight at the time and Storellicastro opted to take a job in the New York State Assembly instead and later made the move to New York City.

From the “Big Apple” to the Granite City might seem like an unusual transition, but it’s one Storellicastro says he was ready to make.

“I was happy to do it,” he says, stressing that wasn’t a knock on New York City where he moved with his wife when their youngest son was still in diapers and their oldest was barely 3.

Then came the pandemic, which took all the best things about living in New York off the table and introduced fresh challenges including requiring his wife to essentially serve as their oldest son’s second-grade teacher.

“It got really hard to live in New York after COVID,” he says, acknowledging that things are better now than they were when the family agreed to explore other possibilities and, for a variety of reasons, Vermont was in the mix.

“How do you explain ‘nostalgia’ for a place you never lived in?” hey asks “But, I feel like that’s what Vermont is.”

From the outside looking in, the low-key lifestyle, the close-knit communities and the outdoor opportunities were all appealing to Storellicastro, who says central Vermont checked all of those boxes and the barre job was immediately appealing.

“I thought: ‘This is a place I can raise a family; this is the right size; this looks like this can be home,’” he says.

It isn’t quite yet, but it will be soon.

For the time being, Storellicastro is spending his weeks at the Reynolds House and splitting his weekends between Albany and Schroon Lake in New York where his wife and children are staying with his in-laws.

All have visited Barre, toured the Liberty Street home they are in the process of purchasing, checked out the municipal pool, the neighboring playground, and a couple of local restaurants.

As a dad, Storellicastro, says the fact that his sons, who were initially reluctant about making a move, are now badgering him about when they will be able to join him, is a relief.

Once they close on their new home next month, Storellicastro says the family will settle in before Maximo, who is heading into the fourth grade and soon-to-be-first-grader Sonny, start classes at the Montessori School in neighboring Barre Town.

Storellicastro says his wife, who was formerly employed as an environmental advocate, but has been a stay at home mom for the past few years, is looking to go back to work and he is eager to do more than decorate his office.

A self-described “political science geek,” Storellicastro has come to believe local government is where you can make the most difference and he thinks his fresh perspective coupled with the know-how of the city’s seasoned staff will be a good combination. It is one of the reasons he took the job.

“There’s a good core group of department heads with a lot of experience and I’m going to be leaning on them, he says.

There are also some easy-to-spot challenges. Aging infrastructure and downtown vacancies among them. But Storellicastro sees a city that has more going for it than not. You can invest in aging infrastructure, you can’t buy Barre’s central location or the volume of traffic that travels through its downtown on a daily basis.

“There is a lot of great opportunity here,” he says. “I saw that coming in, and I’m excited about taking that next step, whatever that next step is.”

After two weeks on the job, Storellicastro says Barre’s biggest assets are its residents. That includes Mackenzie, who has been a helpful mentor, Miles and others who have reached out and welcomed him and those who serve the city in a variety of volunteer capacities.

“There are a lot of civically engaged people here,” he says. “It’s a community of people who care about their community.”

Storellicastro is now one of them — an immigrant who is honored to be running a city that was built by immigrants and is now in the midst of an annual festival that celebrates its ethnic heritage.