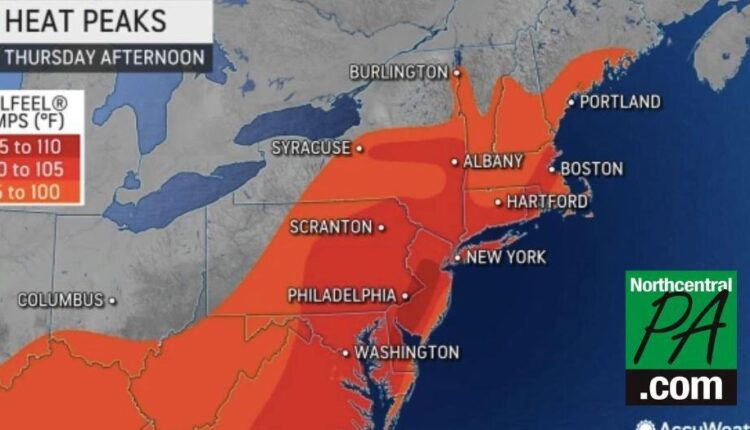 A brief surge of very hot air has its sights set on part of the northeastern United States this week. Temperatures in New York and New England are expected to peak near the 100-degree Fahrenheit mark, which will be the hottest weather of the year, AccuWeather meteorologists say.

Even though the hot spell will not be a long-lasting one, especially when compared to the heat wave during the second half of July, a number of locations across the Northeast will challenge long-standing record highs that date as far back as the 1920s . Whether temperatures climb to the highest levels of the season or not, AccuWeather RealFeel® Temperatures will soar to dangerous levels up and down the northeastern seaboard, particularly during the biggest spike in temperatures that will occur on Thursday.

New York City was among the cities to endure a lengthy heat wave during the latter part of July. The temperature hit 90 for or higher for six-straight days from July 19-24 — two of those days hit 95, the highest temperature of the year so far. The Big Apple will take a run at approaching or exceeding its seasonal high on Thursday.

Meanwhile, just a few miles away across the Hudson River, Newark, New Jersey, is unlikely to reach the highest temperature mark of the year this week. Newark hit 90 or higher for eight consecutive days from July 18-25 and reached 100 five days in a row from July 20-24. That five-day stretch set an all-time record for consecutive days to rise into the triple digits. Newark peaked at 102 degrees on July 24.

Thursday’s heat spike is likely to be more extreme across areas farther to the north, including New England and upstate New York, when compared to locations farther to the south in the mid-Atlantic. Dry conditions and a strong southwest breeze will help to produce hotter conditions across the northern tier. About 22% of the Northeast was in moderate drought or worse as of late July, according to the United States Drought Monitor.

The highest the temperature has been so far in Albany, New York, was 97 on multiple days in July. It is possible the New York state capital approaches the 100-degree mark on Thursday, which could surpass the record high temperature on Aug. 4 of 98 F set in 1955.

Hartford, Connecticut, may climb into the upper 90s on Thursday, which would challenge the seasonal high to date of 97 and surpass the daily record high of 96 set in 1944.

Boston reached the century mark on July 24, and that seasonal benchmark could be tough to match, but Thursday’s record high of 96 set in 1928 could be eclipsed by a couple of degrees or more.

Farther south, the cities of Philadelphia and Washington, DC, peaked at 99 degrees for the year to date on July 24 and 17, respectively. Both cities could tie that mark on Thursday. Philadelphia’s record high for the date — 98 set in 1995 — could be in jeopardy.

Regardless of actual highs reached and whether or not a record is tied or broken on Thursday, AccuWeather RealFeel® Temperatures will approach or exceed the 100-degree mark for several hours during the afternoon over much of the Northeast. In the coastal mid-Atlantic, where the air will be the most humid, RealFeel Temperatures may range between 105 and 110 for a few hours.

People are urged to use caution with rigorous physical exercise and manual labor during the midday and afternoon hours, as well as drinking plenty of water during episodes of extreme heat.

High temperatures surrounding Thursday, the day of intense heat, might be below 90 degrees in many areas of New England and the interior mid-Atlantic this week. In this zone, weak ripples in the jet stream may direct slight cooling effects every other day or so to prevent a string of extreme heat. Farther south, the influence from the jet stream will be less significant and locations from central New Jersey on south are likely to have highs at or above 90 most days. However, highs will fall short of the upper 90s to near 100 most days this week.

Long-duration heat waves are likely to be kept at bay by the weather pattern that will settle in during the first couple of weeks of August.

“There are likely to be higher chances for rain and occasional muggy conditions, but not prolonged dry very hot weather during the first half of August,” Lead AccuWeather Long-Range Meteorologist Paul Pastelok said.

Much of the Northeast racked up a huge number of 90-degree days during July, which made up for a bit of the lag in the hot weather department during May and June. Washington, DC, had only seven days with highs of 90 or better during all of May and June. However, the city has caught up in July with 14 more hot days, which brought the total to 21 through July 31. The average annual number of 90-degree days for the nation’s capital is 41 days.

Newark has already blown past its yearly average of 25 days with 90-degree or higher temperatures. The city has recorded 30 as of Aug. 1, and 20 of those came in July.

There will be more hot days to come in the Northeast, and especially the mid-Atlantic region, later in August, with highs within a few degrees of 90. However, the extreme heat that rivals season-high marks may be tough to match over the next several weeks.

It is possible there is another surge in heat come late August in the Northeast, but that will depend on the behavior of the jet stream and an anticipated upturn in tropical activity, Pastelok said.

Success! An email has been sent to with a link to confirm list signup.

Error! There was an error processing your request.

Get Our Free Newsletters

Morning Headlines: Would you like to receive our daily morning newsletter?

Daily Obits: Get a daily list straight to your email inbox.

Access to independent, local news is important, do you agree?

We work hard to deliver timely, relevant news, for free. 100% of your contribution to NorthcentralPa.com goes directly to helping us cover news and events in the region.

Thank you for saying that local news matters!