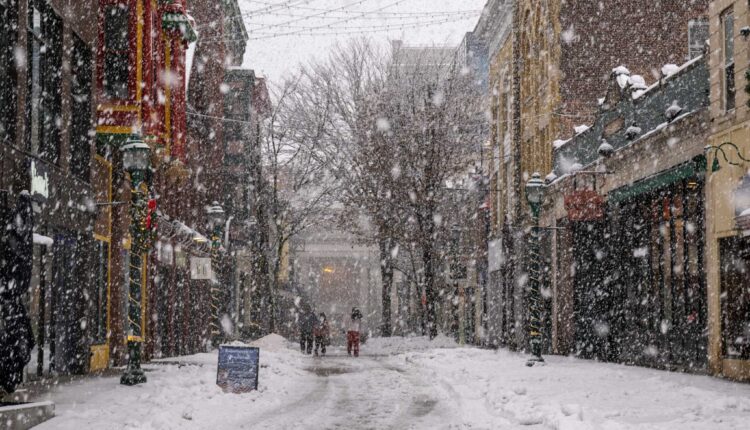 ALBANY — Residents of the capital area can expect to wake up to a fresh dump of snow and a dangerous morning commute on Monday as a winter storm makes its way into eastern New York.

Albany’s National Weather Service is forecasting total snowfall of four to eight inches – but said it’s possible snow bands could develop overnight and produce stronger than expected accumulation rates. If the winter storm tops out, it could drop up to 11 inches of snow in parts of the capital region.

Late Sunday afternoon, the core counties of the capital region of Schenectady, Albany, Saratoga and Rensselaer, as well as western Greene and the northern Berkshires and southern Vermont were under a winter storm warning.

Latest forecast snowfall amounts and warnings/advices in eastern New York and western New England for tonight through Monday. Forecast amounts have increased near and north of I-90, where winter storm warnings are now in effect through Monday afternoon. pic.twitter.com/YBZSLaRJaw

“There is some uncertainty in the forecast, and if a snow band develops over the area and lasts longer,” NWS meteorologist Christina Speciale said, “double-digit snowfall totals are possible in some areas.” But knowing exactly who gets a snow band and who doesn’t is always a challenge.”

Albany meteorologist Michael Main said late Sunday afternoon that the total was increasing by an inch and one band could bring as much as 11 inches of snow overnight.

The storm system will enter the area sometime between 7 p.m. and 11 p.m. Sunday evening, hitting Schoharie County first before spreading to Albany and Saratoga counties, Speciale said. All areas should see falling flakes by midnight, she added.

The weather service warns motorists from Sunday evening to Monday of very difficult to dangerous travel conditions due to snow-covered roads and poor visibility. Wind gusts are expected to reach 15 to 20 miles per hour throughout the storm’s duration.

“If you don’t have to be out tonight, just stay home because it’s really not safe,” Speciale said, adding that those who have the option to work from home or drive later on Monday , should do this .

The storm is widespread and is expected to hit states from Ohio to Virginia to Maine.

A map was released Sunday afternoon showing “high” snowfall levels, which the weather service believes to be 10 percent, highlighting the risk of larger-than-expected snowfall accumulations.

“There’s going to be some areas of this storm that are above average and we’re trying to show that high-end amount to get people’s attention. If we called for three to six inches and you ended up with eight, don’t be totally shocked because there’s a chance it could turn out higher totals,” Speciale said.

And that’s not all. Another significant snowfall is forecast for Wednesday through Thursday. Keep checking timesunion.com for details on this evolving weather system.