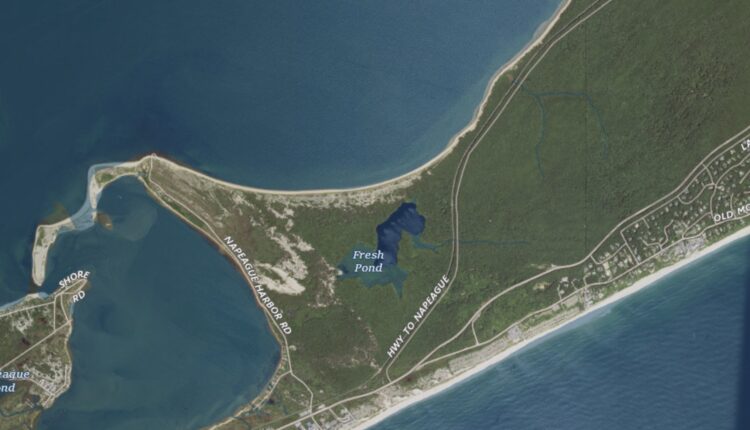 Friday, July 22, 10:38 pm: While firefighters seem to have made headway in bringing the fire under control in some areas, according to radio communications, they continued to search for hotspots with the aid of Police Department drones as the Suffolk County helicopter refueled. The terrain and the fire’s distance from the road presented challenges for both firefighters on foot and those in vehicles.

At least four other departments were working with Montauk to contain and extinguish the fire.

Friday, July 22, 9:43 pm: The Montauk Fire Department has called in neighboring departments to help battle a difficult-to-reach brush fire in the vicinity of Napeague Harbor and Hither Woods, north of Montauk Highway.

The fire was reported by a good Samaritan, according to an East Hampton emergency dispatcher.

Firefighters were on the scene, but one department truck that was sent in to the area became bogged down in marshy terraine and stuck. Another brush truck became stuck in the dunes. Because of the challenging conditions, firefighters were also asked to take their personal four-wheel-drive vehicles to aid in the effort. Some vehicles were making their way to the fire from the bay beach, while others were approaching on unpaved roads through Hither Woods.

A Suffolk County Police Department helicopter was helping to light the way as trucks made their way through the dunes, and to illuminate hotspots. Additional emergency vehicles were staged at the Hither Hills west overlook on Montauk Highway and on Napeague Harbor Road.

An eastbound Long Island Rail Road train was stopped between Napeague Meadow and Napeague Harbor Roads and was set to return to Amagansett about about 9:40 pm

This is a developing story that will be updated as more information becomes available.

9 Amazing Things To Do In Cooperstown