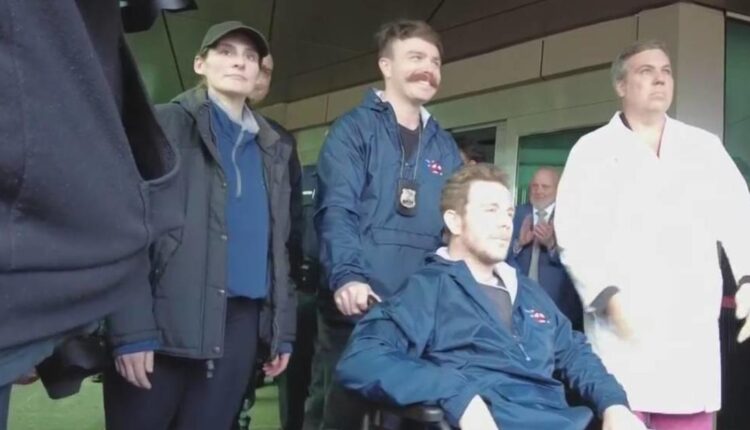 STEINIGER BACH, NY – It was a sea of ​​blue when two Suffolk County police officers were discharged from hospital on Friday, 10 days after they were discharged stabbed while responding to a domestic dispute.

Hundreds gathered outside Stony Brook University Hospital, bagpipes played and helicopters swooped in to honor the heartwarming outcome of a life-threatening confrontation.

“I’m not sure everyone understands the scale of this strike,” said Rodney Harrison, Suffolk Police Commissioner. “These officers are absolute heroes, angels in blue.”

Officer Brendon Gallagher pushed Officer Raymond Stock, whose 31-week pregnant wife was at his side.

“These officers did not know that if they were to respond to a call, they would be assaulted and stabbed multiple times,” said Steve Bellone, Suffolk County executive.

On December 28 in Medford, an armed domestic threat suspect turned on responding officers. It was bad from the start.

“If someone comes up to you with a bowie knife, which is a huge knife, and rams it into you,” said Dr. James Vosswinkle, trauma chief at Stony Brook University Hospital.

Stick was stabbed in the neck, chest and groin. Despite paralyzed vocal cords, he can speak again.

Gallagher was stabbed in the ribs. His bulletproof vest protected his heart.

“By virtue of a purposeful, ideal, perfect chain of events, both officers are alive,” Vosswinkle said.

Enrique Lopez, the suspect, had caused riots in his condominium, according to neighbors. He lived in a home for people with disabilities and mental illness.

Lopez, 56, was shot dead by officers during the standoff.

“It’s a very difficult situation when a case worker calls you because they can’t control the situation,” said Suffolk PBA president Noel DiGerolamo.

The department said the shooting was justified.

Throughout her decade-long career, Jennifer McLogan has been recognized for her breaking news coverage and live coverage of important stories, including the 9/11 attacks, Superstorm Sandy, the Gilgo Beach murders, the Long Island Rail Road massacre and the TWA Flight 800 crash, the Philadelphia police arson attack on radical group Move, fires in the Hamptons’ Pine Barrens, and major snowstorms crippling the Northeast. In sports, she covered Super Bowl XLVI, World Series with the Yankees and the Mets, NBA Finals with Michael Jordan, and the death of Arthur Ashe.