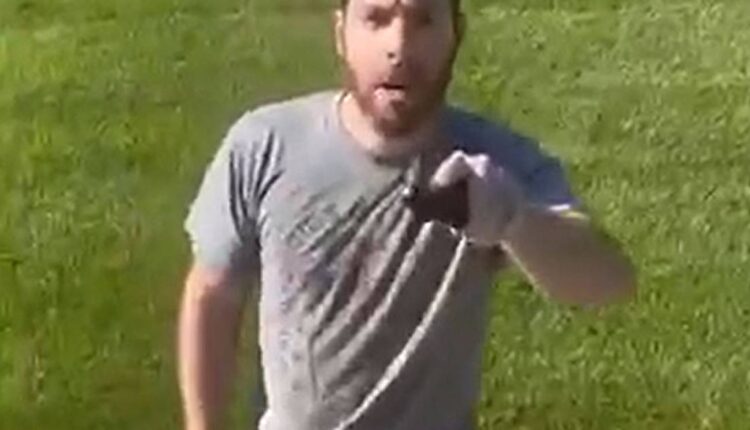 The off-duty NYPD cop arrested in a weekend road rage confrontation pulled a gun on his Long Island neighbor after accusing the man’s son of “casing” his house, video obtained by the Daily News shows.

Debonet, 32, was charged with criminal mischief and menacing. He was also suspended, an NYPD spokesperson confirmed.

The family felt race was a factor in the dispute escalating to the point that Debonet pulled a gun in their front yard. They’re the only Black family on the suburban block in Selden.

“The fact that he even used that terminology, ‘casing,’ basically shows that this gentleman’s thinking is highly irrational. And the fact that [my son] is of African-American descent made it even more personal,” the mother said.

The experience has left the driver’s parents rattled. They had no idea their neighbor was a police officer.

“Unknownst to us, this gentlemen lives three doors, four doors away from us. He’s basically our neighbor,” the started mom told the Daily News. “I haven’t left the house. I’m basically paranoid. I’m constantly looking out the window.”

The family spoke to The News on condition of anonymity about the incident that allegedly began around 11:30 am, when their 24-year-old son drove down their block and made a turn on a narrow part of the road, forcing Debonet, who was going in the opposite direction, to slow down.

Debonet followed the son and confronted him, the family says.

An off-duty NYPD cop accused of showing up at a Long Island driver’s home after a road rage incident and threatening the man’s father with a gun lives just a few doors down from the victims. (Obtained by Daily News)

“What sets him off was the fact that he had to slow down — another car was turning and he had to share the street,” the dad told The News.

The cop, who was in a t-shirt and shorts, started following their son, his mother said. The son panicked and called his mother, who told him to head to the nearest police station. But Debonet and the son wound up stopped at a red light on Old Town Rd. at County Rd. 83, she said.

Her frightened son then tried to pull away, rear-ending another motorist, she said.

“That’s when [Debonet] went around the right side of the car and punched the passenger’s side rear-view mirror and knocked it out,” she said. “Then he got in his car, walked away.”

Her son filed an accident report — and thought he had seen the last of the enraged driver. But Debonet showed up at their home at about 5 pm, the parents said.

Debonet had blocked their driveway with his car, forcing the parents to park on the street when they came home and found him standing at their front door asking to talk to the son, video shows.

The confrontation filmed by the father is tense from the start. As the dad walks up, Debonet says, “Your son needs to stay away from my house.”

As the dispute becomes more heated, the father apparently points a pen at the cop’s face, which is not seen on video.

Debonet then says, “Get out of here with the pen,” pulls up his shirt, and draws a gun from his waistband.

He then tells the dad, “Your son was driving past my f—ing house and telling his friend to drive past my house, casing my house. You almost stabbed me with a f–king pen!

“I just came to talk to [the son] and find out what’s going on,” Debonet says.

“I was going to apologize before you came and put a pen to my neck.”

Debonet didn’t move his car from the driveway as they waited for Suffolk County police to show up, the mom said.

After spending several hours interviewing the family, Suffolk police arrested Debonet. The cop was issued an order of protection and released without bail.

Catch up on the day’s top five stories every weekday afternoon.

The dad said he met Debonet once, to welcome him to the neighborhood about two years ago. They hadn’t spoken since.

Debonet (pictured) accuses the dad of putting a pen (at right) to his neck, which isn’t visible on video. (Obtained by Daily News)

“He said no one likes me on the block,” the dad said. “He just moved here two years ago and I’ve been here 15 years.”

The family said the incident evoked memories of the deaths of Trayvon Martin in Florida in 2012 — who was killed by a neighborhood vigilante who wrongly thought the teen was casing homes in his neighborhood — and Ahmaud Arbery, who was chased by three white men who mistook him for a burglar and murdered in a racially motivated hate crime in Georgia.

“You don’t show up at someone’s house with a 9 mm and then pull it and aim it — brandish it, basically,” the mom said. “He saw the fear in our face and in our eyes and the fact that he identified himself as a cop made it even more scary. It tells me he’s irrational. He shouldn’t be on the police force. He really shouldn’t be.”

Debonet’s lawyer did not return a call seeking comment Tuesday. The Police Benevolent Association declined comment on the incident.