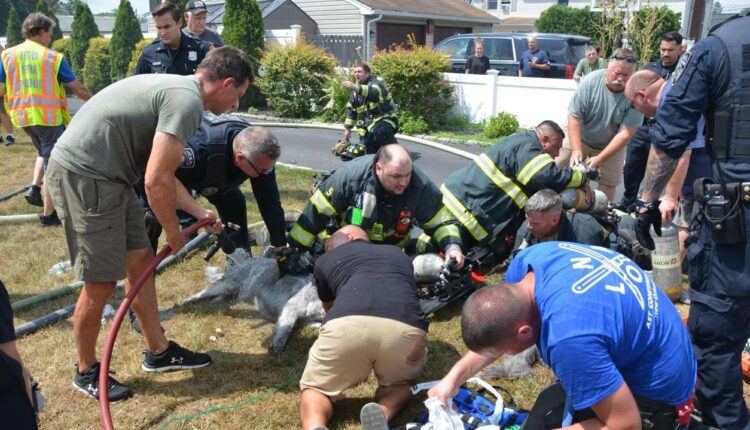 An off-duty Suffolk County Police officer joined firefighters to rescue a woman and her three dogs from a house fire in Islip Terrace on Sunday morning.

The 19-year-old woman, who was not identified, and her pets were trapped in the basement of a house on Cleveland Street around 11 am Jared Gunst, a Suffolk County Police Officer and First Assistant Chief with the Islip Fire Department, responded and entered the home as the woman made a call to 911 from the basement.

Officials said Islip Terrace Firefighters Matthew Arthurs and Danny Blasucci broke into the basement through the window and pulled her to safety. She was brought to a hospital for treatment of non-life threatening injuries.

Officials said he provided “advanced medical support” to two of the three dogs. They were all brought to Veterinary Medical Center of Long Island in West Islip. During the ride to the veterinary center, Police Officer Eileen Nieves provided aid to one of the dogs. All three of the dogs are expected to survive.

Detectives from the Suffolk County Police Arson Section are investigating the cause of the blaze.

Lisa joined Newsday as a staff writer in 2019. She previously worked at amNewYork, the New York Daily News and the Asbury Park Press covering politics, government and general assignment.