Observations from SU’s loss to No. 7 Notre Dame: 4th quarter collapse, inside scoring 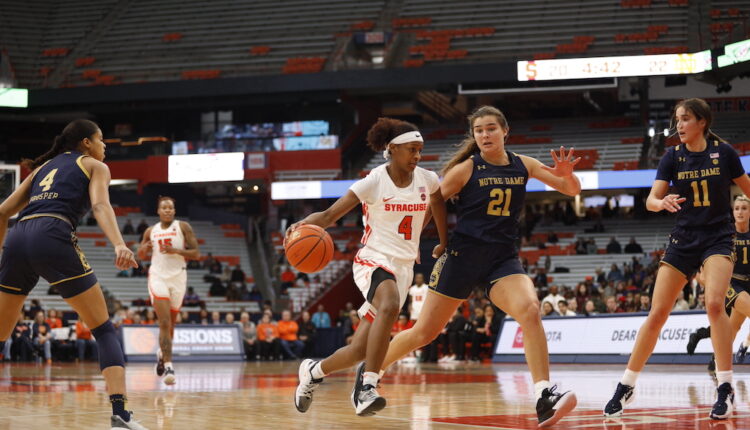 On a two-game outing to Clemson and Boston College, Syracuse picked up two crucial wins in the Atlantic Coast Conference’s first two away wins for the Orange.

Against the Tigers, SU used a 24-1 run that extended from the end of the second quarter into the third to create just enough cushion to fend off a Clemson comeback that reduced the deficit to just four. And against the Eagles, Syracuse used a 15-3 run in the third quarter to slip past Boston College and secure their third straight win.

On Sunday, Syracuse returned to the JMA Wireless Dome and hosted No. 7 Notre Dame. Syracuse held the game tight in the first half, trailing only 31-26 at halftime and even taking the lead with an 8-0 run to to start the third quarter. But a quick 7-0 ND run early in the fourth quarter set in motion a 22-11 fourth quarter in which the Irish eventually won 72-56.

Close (but for 3 quarters) but no cigar

Similar to Syracuse’s loss to NC State two weeks ago, the orange fell flat in the fourth quarter. Syracuse remained scoreless in the closing stages as the Wolfpack charged all the way back to retake the lead. The difference between that game and Sunday’s game against Notre Dame was that the Fighting Irish led in the fourth quarter.

A jumper from Olivia Miles and a corner 3 were part of a quick 7-0 ND run that resulted in head coach Felisha Legette-Jack calling a time-out. The Orange tried to carve out a lead of up to 16, but Dara Mabrey drilled two 3s. Miles hit another shortly after, countering whatever Syracuse had left in the gas tank. Surpassed 22-11 in the fourth quarter, Syracuse saw its three-game winning streak snapped.

Take advantage of the sales and block the party early

To keep up with Notre Dame, Syracuse knew it had to take advantage of the Fighting Irish’s turnovers. Orange played well defensively, averaging 10.88 steals per game, the best in the conference. In the first quarter alone, SU produced four steals and seven point off turnovers. On one play, Fair intercepted a pass from Olivia Miles, quickly grounded the ball and found Asia Strong in the low, who pulled the foul and scored the bucket. It ended on a short 6-0 run to keep the game at 12.

ND’s inside goal in the first half

Aside from a baseline jumper and a 3-pointer from Mabrey, the other 24 points from the field in the first half all came in the paint. Notre Dame had easy layup after easy layup led by Miles’ 10 points in the first half. In the transition period, Miles had a one-on-one with Teisha Hyman and rose to the trophy after making an easy layup.

Notre Dame doesn’t tend to get the majority of its score from 2-point range, as it scores from inside the arc at a 61.8% clip, which ranks 330th according to Her Hoop Stats. Also, Syracuse is one of the better teams defensively inside and ranks 29th in percentage of opposing points from inside. Strong and Wood made it difficult to land low by notching five blocks total.

Miles continued her offensive success in the latter part of the third quarter, making a jumper in the paint and a fast break layup to put ND in the fourth quarter with a 50-45 lead. Finally, in the second half, ND started grabbing buckets from the perimeter that helped him break away from the orange.

Syracuse have tended to rely on Dyaisha Fair for their goals, but in recent games they’ve started to see a lot more production from other players offensively. Though Fair led the Orange in both games against Clemson and Boston College, Syracuse had five and six players in double figures, respectively. At halftime against Notre Dame, Alaina Rice, Strong and Fair all had six points, while three other players were also in the stats list.

Rice blew a 3 from the left wing to close SU’s deficit to 12-9 with a fair assist. Woolley dribbles left and cuts back to the right for a layup and SU’s first basket of the second half. Then Woolley came in from the left wing before handing Wood a pass under the basket for an easy two. Fair also hit a 3 from the right wing to round out an 8-0 run in the third quarter, forcing ND head coach Niele Ivey to call a time-out.

After the time-out, Fair dribbled to the left side of the key and handed the ball to Hyman, who pushed in, backed up and made the middle-distance jump. Hyman also collected two assists, one of which came when she drove down the right baseline before dishing the ball deep to Wood. The second came when Hyman found Dariauna Lewis under the basket to draw a one chance. Although Lewis missed the free throw as SU took a 40-38 lead. Fair still led the Orange with 14 points.

Gun fired at Islip Bar fight, innocent bystander in critical condition after being shot in the neck

At least 68 dead after plane crash in Nepal