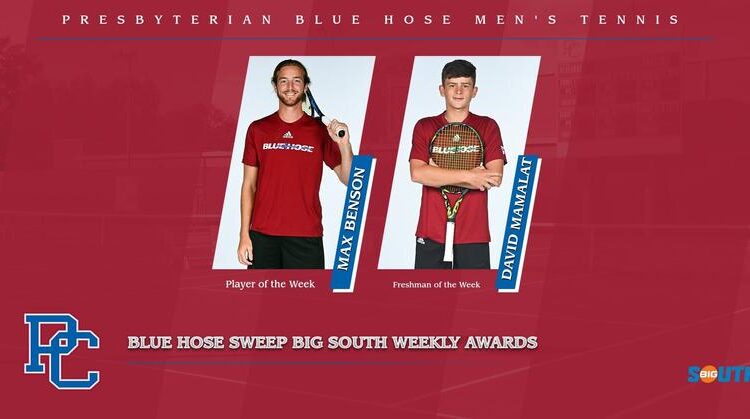 CHARLOTTE, NC – The Blue Pants won the Big South Conference weekly men’s tennis awards after their performances in last week’s Presbyterian games against Georgia Tech and Lander. Fifth grader Max Benson was named Big South Player of the Week for the fifth time in his career. While freshman David Mamalat picked up the league’s Freshman of the Week award.

PLAYER OF THE WEEK

He then defeated Lander’s Ambroise Marchand 6-2, 6-0 in Presbyterian’s victory over Lander on the road on January 20. He also teamed with Milanovic for a 7-5 win in number one doubles, the pair’s victory handing Blue Hose the doubles win over Lander.

newbie of the week

The Philadelphia, Pennsylvania native was part of a doubles tandem that won 2-1 against doubles teams Georgia Tech and Lander. He teamed with Teo Cariov to record a 7-6 (7-1) win in doubles number two, giving Presbyterian the double in game two against Georgia Tech on Jan. 19.

He and Cariov then achieved a 6-3 win in doubles number three, which helped Presbyterian claim the colon in Blue Hose’s win over Lander on January 20.

Benson, Cariov, Mamalat, Milanovic and the rest of the Blue Hose men’s tennis team return to action this Sunday, January 29 at 12:00 p.m. in North Carolina against UNCW