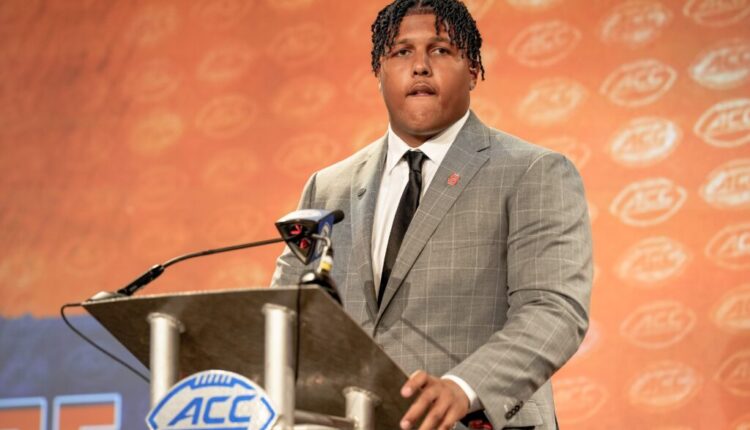 Where does the scouting report of Syracuse OT Matthew Bergeron stand in the 2023 NFL Draft? We know the 2023 offensive tackle class is imbued with uncertainty at this point. But can Bergeron be the prospect to help combat that and provide more assurances for NFL teams in the early rounds? Nothing is given, but looking at Bergeron’s tape, he might have the tools to surprise.

Save your draft. Save your team. Win money.

As more and more eyes flock to the Syracuse offense to watch Sean Tucker, another player is gaining buzz on the Orange offensive line.

Bergeron, now entering his senior season, is coming off a standout 2021 campaign that saw him earn honorable mention All-ACC honors. Heading into 2022, he’s on the Shrine Bowl 1000, and the door is wide open for him to make waves in the 2023 NFL Draft.

Bergeron didn’t come out of nowhere. He may have been a bit overlooked when he joined the Syracuse Orange as a top recruit from Canada, first hailing from Montreal, Quebec. But ever since he arrived at Syracuse’s campus, he’s been nothing but a fixture for the orange on the football field.

In 2019, as a true freshman, Bergeron played in 12 games, starting five at right tackle. In 2020, he started three more games at RT, before switching to the left side for the remaining eight. And in 2021, he started all 12 at LT. Thirty-five games played and 28 starts later, Bergeron has established himself as a 2023 NFL draft prospect. But how does his tape stack up?

After years of production, Bergeron finds himself in the thick of a polarizing 2023 NFL Draft offensive tackle group. Does the Syracuse OT have the physical potential to command early-round billing when other options underwhelm?

At 6’5″, 327 pounds, Bergeron has excellent mass and frame density, and he brings great length as well. Within his frame, he’s an exceptional short-area athlete, who projects well to the NFL. Bergeron is a superb lateral mover who can match rushers across the apex with quick, efficient shuffle steps. He’s explosive off the snap, getting out of his stance very quickly, and can quickly wall off defenders with his athleticism, width, and strength.

Expanding on his athleticism, Bergeron shows off an impressive short-area explosion when engaging blocks in close quarters. He has enough burst to get outside the 5-technique on outside rushing plays. His short-area explosiveness, combined with his wide frame and base, allows him to match almost anyone. Bergeron’s a very energetic mover for his size. And beyond his burst and agility, he displays excellent recovery athleticism when swerving to close off stunting defenders.

Not only is Bergeron exceedingly athletic, but he also brings great functional power and strength. The Syracuse OT generates impressive upper-body torque when latched. With that torque, he can throw defenders into the dirt. Beyond that, his hands are heavy and have exceptional knock-back power. A prime part of Bergeron’s efficient power exertion is his mechanical prowess. The Syracuse OT gets great rotation on his extensions and can bring power up through his base with his hips. He can drive defenders upfield with his powerful base and leg drive.

Along with his strength, Bergeron also brings the grip strength to gather and neutralize power rushes. And with his core strength, he assumes control in anchor struggles and redirects defenders out of plays. The Syracuse OT can latch and maintain anchors on the move. Using his anchor and leg drive, he plows defenders off the line and paves open running lanes. He can also flip his hips to adjust angles.

For his size, Bergeron has solid knee bend, which he uses to maintain proper leverage when matching rushers. He’s also fairly fluid in his hips. He’s shown he can quickly adjust alignments and flip around without much delay. Moreover, Bergeron can flip his hips after getting outside the 5-technique and latching to seal off reach blocks. His combination of athleticism, power, strength, and fluidity grants him immense potential. 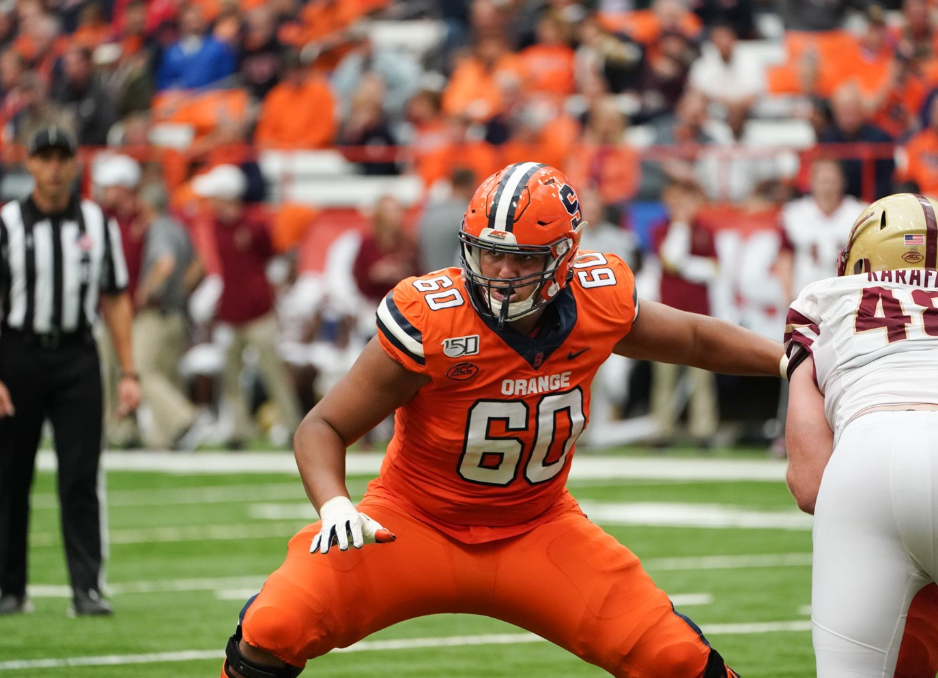 Operationally, there are points of appeal for Bergeron as well. The Syracuse OT keeps his hands loaded on the drop-back, maximizing potential energy. He’s shown to wait until the defender is in his wheelhouse to extend and punch. When he extends, Bergeron extends fully to unleash full knock-back power. He can stab a long arm into his opponent’s torso to shock defenders and delay rushes.

While Bergeron keeps his hands loaded, his hands are seldom too low. They often remain loaded at chest level, in ready position to strike. With this stance, Bergeron targets individual extensions and uses independent hands. He has excellent reaction quickness when defenders make their moves, and he flashes the ability to use independent punches in rapid succession to gather rushers.

Going further, Bergeron actively times extensions at the apex to seal off rushers. He can use his length to get a lever on defenders. Upon reaching that point, he can punch inside the torso and latch, locking up rushes.

For his size, Bergeron has very fast feet and can quickly reset his positioning on reps. He can also tempo his footwork and control his throttle to match rushers. The Syracuse OT maintains patience with looping defenders and responds well to stunts. Bergeron doesn’t get tunnel vision and has an awareness of delayed blitzers more often than not. Furthermore, Bergeron can pass off defenders and reset his alignment to take on new opponents. He knows how to use his length to obstruct lanes and delay free rushers.

Finally, Bergeron is a patient blocker who also brings good targeted aggression. The Syracuse OT has mauler moments on tape and will finish defenders into the dirt when he gains control of reps.

Bergeron has an excellent physical foundation at his disposal. It’s very hard to poke holes when a prospect has high-level athleticism, power, strength, and length. Physically, Bergeron’s lack of elite range when blocking in space is one of his few drawbacks. But beyond that, there are other imperfections in his overall game.

While Bergeron has an athletic, compact frame, his low-cut build gives him a longer torso, which can make it easy for him to play too upright. It’s sometimes difficult for Bergeron to lower his pad level off the snap. To that end, he could do a better job maintaining balance and controlling weight transfers. Bergeron doesn’t have great balance at contact in space, which can prevent him from sustaining blocks.

Going further, Bergeron sometimes gets tugged backward over his center of gravity while in phase. This can allow rushers to gain leverage and take control of reps. With his inconsistency in maintaining leverage, Bergeron often places his hands a bit too high on extensions and punches. When he loses leverage, he can be a bit too grabby and bear hug frames, drawing holding penalties as a result.

Bergeron’s upper-lower synergy could also improve, as he sometimes punches before his base is stable. Occasionally, his hands can be too wide, exposing his torso to power and impeding clean placement. Bergeron could also stand to get more depth on his kick. He sometimes has inefficient footwork off the snap. At times, he could better leverage his set angle to minimize the rusher’s options. Setting too far vertically can open the inside.

Among other things, Bergeron isn’t quite as fluid flipping his hips in space. He could improve some on his blocking angles in the open field, and he’s occasionally late to react to delayed blitzers.

There are very few guarantees in the 2023 NFL Draft OT class. Bergeron doesn’t change that, but he does bring a brand of talent to the class currently lacks. At the moment, Bergeron grades in the early-to-mid Day 2 range on my board. And with his high-upside mold, it’s not brash to say he could enter Round 1 territory with a good season.

The uncertain OT class opens the door for Bergeron to be viewed in such a way. But his physical foundation is alluring, regardless. Few blockers over 320 pounds carry their weight as well as Bergeron does. He’s explosive, fleet-footed, and fluid, with superb recovery athleticism and smoothness as a lateral mover. Beyond that, Bergeron has great length, power capacity, strength, and he ties it together with a physical edge.

There are areas in which Bergeron can improve. The Syracuse OT still has room to refine several components of his hand usage and footwork. And his leverage is the largest obstacle for him heading into 2022. While he has good knee bend, Bergeron’s low-cut frame can work against him. He’ll have to make a concerted effort to maintain his pad level, play with a stable center of gravity, and avoid lurching.

Nevertheless, if draft evaluation is projecting what players can be, then Bergeron has one of the most exciting ceilings in the 2023 NFL Draft. His all-encompassing skill set not only offers scheme versatility, but he also has experience at left and right tackle. Bergeron can be a quality NFL starter, with the flexibility to play both tackle spots.

Ian Cummings is a Draft Analyst for Pro Football Network. You can find his writing here and follow him on Twitter: @IC_Draft.