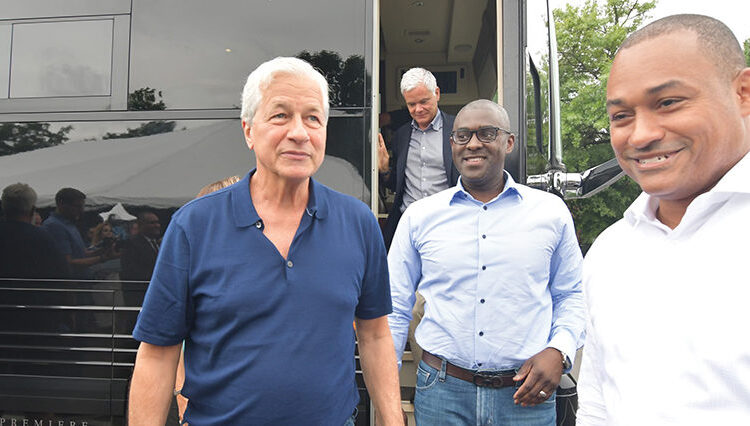 An $850,000 investment from JPMorgan Chase to Ascend Long Island is expected to further bolster entrepreneurs in underserved communities in the ways that they need it most: Access to low-interest loans, guidance and a pipeline to contract opportunities.

JPMorgan Chase CEO Jamie Dimon delivered news of the funding in person Monday at a Chase branch in Huntington. Driving inclusive economic growth is a top priority for the investment banking company, as shown by its commitment through Ascend, a national network that includes 14 cities plus Long Island. Launched in 2018, Ascend Long Island is administered through Hofstra University and BOC Capital, which provides financing to small business owners, with a focus on underserved communities.

“It’s been 175 years since the Civil War, and the Black community isn’t even remotely close to parity,” Dimon said Monday.

For many, the network of supply chains of big companies and mentors, along with financing, is out of reach, said Lawrence Levy, executive dean of The National Center for Suburban Studies at Hofstra University.

“America’s first suburb is sadly to my way of thinking America’s most segregated suburb, and it continues to have toxic implications,” Levy said.

But Ascend Long Island, with its resources, offers “a way of creating wealth wholesale rather than just do workforce development one employee at a time,” Levy said.

Dimon’s in-person announcement demonstrated his commitment and belief in the program, Levy said.

“It’s one thing to write a big check and to provide a lot of people who are engaged in helping,” Levy said. “But for someone like Jamie Dimon, a global leader who has to be all over the world to actually show here…is really special.”

JPMorgan Chase leaders had looked for “solutions of closing the racial wealth gap,” said Sekou Kaalund, head of JPMorgan’s consumer banking for the Northeast. “One of those solutions is entrepreneurship and supporting diverse businesses, especially Black and Latino businesses.”

And in Nassau and Suffolk counties, “when all of our businesses succeed, especially those who have not had access to economic opportunity, all of Long Island succeeds,” Kaalund said.

The funding announced this week pays for the program, instruction and the space to hold classes, Levy said. It also pays for people to recruit community members, and to connect companies with the program’s members.

“If you’re lucky and talented enough to get a contract with the bigger company, you need to have the capital to be able to pay people to work on it before you get paid yourself,” Levy said. “You need to buy inventory, and that takes the ability to have a business loan. For somebody that doesn’t have a track record at this level, or doesn’t have the revenue yet, that’s really hard.”

That’s where BOC Capital comes in. “Their standards for giving are stringent, but not as stringent as others to get them started,” Levy said. And since the program started, JPMorgan Chase said it has invested more than $2 million. It’s enabled 55 entrepreneurs to secure an estimated $4 million in contracts, according to published reports. The idea is to “provide support, training and contracts” to these communities, giving “as much access as we possibly can to contracts,” said Michael Dowling, president and CEO of Northwell Health, a partner in the program.

“Many people have very good ideas, but they don’t know where to go and they don’t have the background” to move forward,” Dowling said. “We provide that kind of curriculum for them.”

Northwell is “involved heavily” with Ascend Long Island, Dowling said. The healthcare system is “increasing the proportion of contracts” to minority and women-owned businesses.

Ascend Long Island is also working with National Grid for a weathering program in which the utility needed construction expertise.

“Diversity, equity and inclusion are chief priorities of the Long Island Association – if we do that it supports our overall economic growth as a region,” said Vice President of Government Affairs and Communications Stacey Sikes.

Dimon was on Long Island as part of a Northeast bus tour. In a private interview, he now said “a lot of businesses are doing better.” Still, he said businesses should “always be prepared for hostile events. You want to weather them.” “The challenge for small business owners is finding the capital to scale up their businesses to be capable of handling large-scale projects,” Andrews said. “Small business opportunities are often needed for a business to provide a beginning pathway to growth.”

“For these businesses, long-term mentors should be sought out wherever possible,” he said.

One strength of Ascend Long Island, Levy said, is that it is a community-facing program.

“We don’t just decide on a high level with JPMorgan Chase what [members] should know and when they should know it,” he said. “We find out first, ‘what do you need” and ‘what do you think you need help with?’ And if we are aligned, we deliver it. If we’re not we try to figure out who can deliver it.” And if the two are not aligned, the organization will say so, but point to other resources that may be able to help.