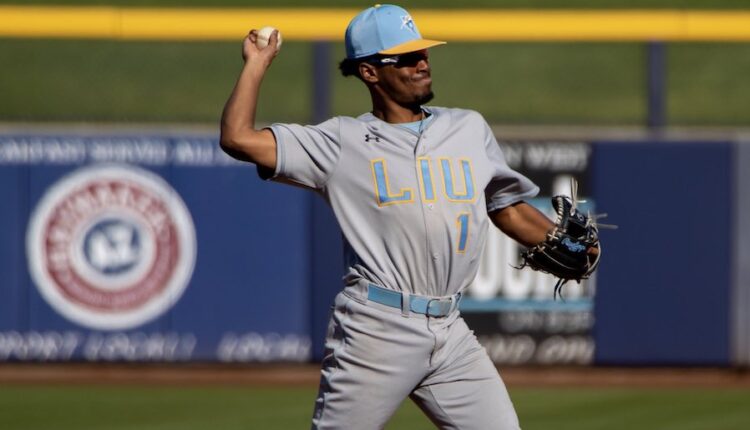 More Long Islanders are headed to the Big Show.

That’s because two of our own were picked in this year’s MLB draft.

Fitzpatrick, a left-handed pitcher out of Rutgers, was picked in Round 10 by the Milwaukee Brewers. The 2018 St. Anthony’s High School grad went 7-3 in college as a starter. In 23 appearances, he tossed 59 strikes and recorded a 5.24 ERA.

Exposito, the shortstop from Long Island University and St. John the Baptist, was taken in Round 16 by the Atlanta Braves. In 91 college games, Exposito slugged 18 home runs and tallied 68 RBIs. His teammate Joshua Loeschorn (Butler, NJ) was also drafted. He was picked in Round 20 by the Pittsburgh Pirates.

Scroll down and read a breakdown on both Fitzpatrick and Exposito, courtesy of Axcess Baseball’s Vinny Messina.

more Long Islanders to the MLB

Fitz is a 6’7 southpaw that dominated the Cape Cod League this summer. He allowed no runs over 19 innings for the Brewster Whitecaps against the top collegiate players in the country. Without a doubt that rocketed his value. He has Tommy John but it fully back and his best baseball may still be ahead of him as he only pitched 45 innings at Rutgers over 3 seasons. On paper, this is the type of player that would have an excellent chance to move through the system quickly and make it to the big leagues in 3 seasons. The brewers are on the cutting edge of developing pitchers. If they turned Corbin Burnes from the NL’s worst pitcher in 2019 to the Cy Young winner in 2021, what can they do with Fitz?

First off, not a bad week for St. John the Baptist to have Logan O’Hoppe appear in the Futures Game on Sunday and then EJ — who was on the same team as Logan in 2018 – gets drafted by the Atlanta Braves in the 16th round. Exposito was originally committed to LIU Post before deciding to attend NY Tech. He was off to a great start to his collegiate career before the season was shut down in 2020. After Tech ended the program, he transferred to LIU who was now a Division-I program. He started every inning of every game for the NEC Champs and smacked 13 home runs. He’s incredibly athletic, has plus power for the position and his makeup is off the charts. He’s very easy to root for.

Top: EJ Exposito tossing the ball around during a game. (Credit: Axcess Baseball/Twitter)

Check Out How Buffalo Has Changed In The Last 15 Years