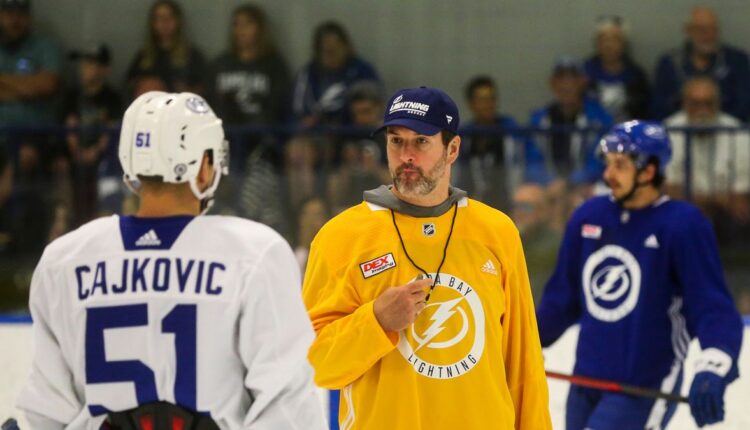 BRANDON — JP Cote had “a tough couple years” before signing with the Norfolk Admirals in 2011. The former Canadiens prospect thought his career was over after struggling with injuries and barely playing the previous season in the ECHL, a tier below the American Hockey League .

Then-Norfolk general manager Julien BriseBois, though, added him as a veteran presence to the Lightning’s AHL affiliate. Cote watched his first game with a player who was a healthy scratch and in danger of being demoted to the ECHL.

“Little by little,” things clicked for his new friend, Ondrej Palat, who joined forces with Tyler Johnson and Richard Panik on a line that led the Admirals on a 28-game winning streak en route to a Calder Cup championship.

Palat spent most of the next season with the Syracuse Crunch when the Lightning transferred their affiliation. Eventually, he was called up to Tampa, where he scored the second-most postseason goals (48) in franchise history.

Cote, meanwhile, “fell back in love with hockey,” playing 239 games for Norfolk and Syracuse and earning a brief call-up to Tampa during the 2013-14 season. He was goaltender Andrei Vasilevskiy’s first roommate in the United States and helped mentor several other core pieces of the Lightning’s run to four Stanley Cup finals in eight seasons, including Nikita Kucherov, Brayden Point, Yanni Gourde and Alex Killorn.

Former Crunch teammate Mike Angelidis isn’t surprised Cote has thrived since joining the organization as a director of player development alongside assistant GM Stacy Roest in 2019, calling him an “unbelievable leader” and constant “safety valve” for younger players.

“Maybe if I would have played 13 years in the NHL, I probably couldn’t help guys that are struggling,” Cote said. “Because that’s what it is. At one point, you’re going to hit a wall.”

Stacy Roest talks to prospects during a stoppage in play during a 3-on-3 tournament at Lightning development camp. [ DIRK SHADD | Times ]

It’s no accidental low-draft picks like Palat (seventh round, 208th overall in 2011) and undrafted signees like Johnson became key cogs in the Bolts’ machine. Almost 20 former Crunch and/or Admirals players have had their names engraved on the Stanley Cup.

When Cote started out with Montreal’s affiliate, player development wasn’t even “a thing.” Now, it’s a priority.

“It’s definitely part of the Lightning DNA,” Cote said. “And I think we’re ahead of a lot of things in that department.”

McKade Webster, a 2019 seventh-round pick heading into his third year at the University of Denver, saw Cote at least five times last season. He said access to player development staff and skating coach Barbara Underhill was especially helpful as he focused on improving his mechanics following double-hip surgery in 2020.

Follow all the action on and off the ice

We’ll send you news, analysis and commentary on the Bolts weekly during the season.

You’re all signed up!

Want more of our free, weekly newsletters in your inbox? Let’s get started.

Explore all your options

“They’re always there for anything that I need,” Webster said during Lightning development camp in mid-July. “They come out to games during the year, and they watch and give pointers telling me this and that, so it’s awesome.”

Some NHL franchises, Cote said, aren’t willing to invest heavily in their minor-league rosters. He noted Roest, who also succeeded BriseBois as Crunch GM, is always searching for a player who can “get that extra playoff series” to give prospects valuable experience.

“A lot of players go there, and I think they underestimate that league,” Roest said of the AHL. “And once that happens, it’s hard to get it turned around.”

The Cunch’s veteran core over the last decade has included Cote, Angelidis, Gabriel Dumont, Pierre-Cedric Labrie and Daniel Walcott. The quintet has over 3,000 games of combined AHL and NHL experience and counting. (Walcott, 28, and Labrie, 36, both still play for the crunch.)

“We had a really good nucleus, and it showed,” Cote said, “and what we created back then, you see the waves still today.”

Angelidis, who arrived in Norfolk the same year as Jon Cooper, said his six years with the Admirals and Crunch were “totally different” from what he had experienced with the Hurricanes’ affiliate in Albany, New York. Management, including BriseBois, was around “all the time.”

The team had the opportunity to work regularly with skating instructors like Underhill, as well as psychologists, dieticians and other specialists. These resources were not just directed at high draft picks.

“If you’re outplaying guys, they’ll turn that (AHL or two-way) contract into an NHL contract, give you a chance,” said Angelidis, who played 14 games for the Lightning over five seasons.

He said the Lightning took care of their minor-league roster off the ice, too. Being away from family around the holidays was difficult, so making the effort to throw a Christmas party mattered.

“That’s a small thing, but it means something to the guys. Those are memories, right? … Those little things add up to a winning culture, and then development.”

Mike Angelidis, right, scores 13:21 into his NHL debut in 2012 after being called up from Norfolk.

2022 first-round selection Isaac Howard, who had pre-draft rankings as high as 10th, said falling to Tampa at pick 31 was a “blessing in disguise.”

“Obviously, a draft doesn’t matter too much,” he said. “But now it’s just super important to be at a good organization.”

No one needs to tell that to Roest, who played almost 250 NHL games for the Red Wings and Wild after going undrafted. He and scouting director Al Murray collaborate on a simple, crucial mission to ensure the Lightning’s future succeeds in Syracuse.

“Draft and develop, right?” he said.

“And then they finally make it to Tampa and never come back.”

Sign up for Lightning Strikes, a weekly newsletter from Bolt’s beat writer Eduardo A. Encina that brings you closer to the ice.

Never miss out on the latest with the Bucs, Rays, Lightning, Florida college sports and more. Follow our Tampa Bay Times sports team on Twitter and Facebook.

3 reasons Matthew Savoie wants to be a franchise cornerstone