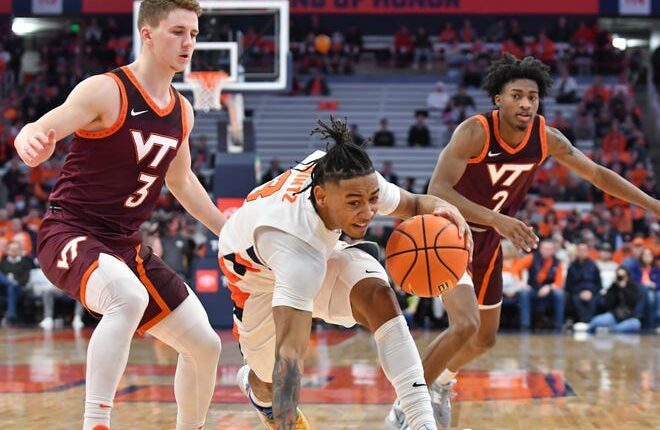 ∎ NOTE: Senior guard Joe Girard had 24 points and freshman forward Maliq Brown recorded his first career double-double (11 points, 12 rebounds) to lead Syracuse to an 82-72 home win over Virginia Tech on Wednesday. Senior center Jesse Edwards added 13 points and a career-high six assists while Syracuse had 43 points in the first half and led by 22 points overall. Syracuse shot .508 percent from field, .500 percent from 3, and .636 percent from the foul line. It kept the Hokies from 3 to 15 percent (3 of 19). … Girard has scored in double figures in 10 straight games, a streak that began with the Dec. 3 win at Notre Dame (62-61), where he had 20 points. Edwards added 22 points and 16 rebounds. Irish supersenior Dane Goodwin had 16 points and nine rebounds. Graduate guard Cormac Ryan added 14 points, three rebounds and three assists. In that game there were 12 draws and 12 lead changes. … The Oranges have won three of their last four. They are 8-3 overall at home with losses to Bryant, Colgate and Pittsburgh. … Syracuse is one of six repeat opponents for Notre Dame. The Irish are 1-4 against repeat league opponents so far this season. … Syracuse leads the all-time series 32-23, 15-11 at the Dome and 7-4 as ACC peers. It has won three of the last four encounters. Notre Dame last won on January 4, 2020 in central New York. … Syracuse was selected eighth in the 15-team ACC last season and goes third in a five-way tie at the weekend. Notre Dame, selected sixth, sits in 12th place with Virginia Tech and Georgia Tech in a three-way tie. … Syracuse leads the league in blocked shots (5.94). It ranks third in defense with field goals (.404) and steals (8.1), fourth in assists (14.7), fifth in field goal percentage (.462) and 3-point percent in field goals (.364) and sixth on offense (75.0 ppg), seventh in assist-to-turnover ratio (1.23), ninth in scoring margin (+5.59), free-throw percentage (.731) and 3-point field goal percentage (.331) and tenth in scoring defense (69.4). … Edwards leads the ACC in rebounds (10.7) and blocks (2.88) and is second in field goal percentage (.595). Freshman guard Judah Mintz leads the league in steals (2.1). … Irish super senior Nate Laszewski ranks second in the league in free throw percentage (.864); Goodwin is second in minutes (36.1). … Notre Dame remains without a win away from home. The Irish are 0-2 (St. Bonaventure, Georgia) in neutral site games and 0-3 (Florida State, Boston College, North Carolina) in true away games. … It has lost five straight league road games dating back to last season and its most recent league road win – February 12, 2022 at Clemson. … After that, the Irish will play four of their next five league games at home.

∎ QUOTE: “Building on what we did (against Georgia Tech), being able to take hits and keep going and staying tough throughout the game isn’t easy. Some of us have done it before; some of us are new to this. Keep believing in our group, believing in what we can do when we play with that edge and that swagger. It’s important to get that on the road and we plan to do it on Saturday.” — Notre Dame Graduate Student Guard Cormac Ryan on what this Irish team needs to do to be better away from home.

Woman in critical condition after shooting in Depew