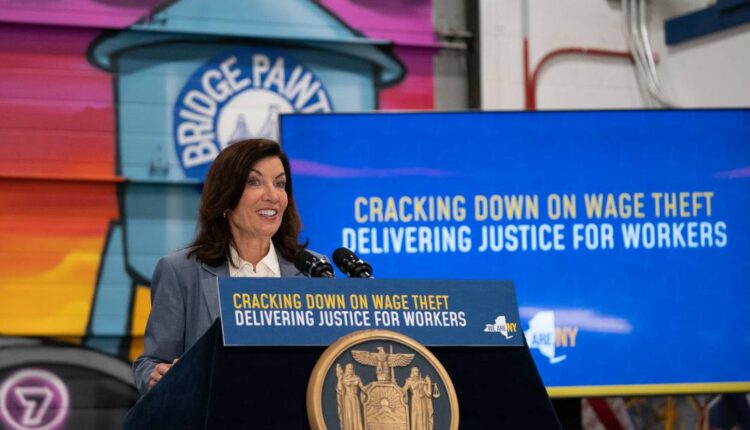 gov. Hochul and Attorney General Letitia James announced a spate of recent felony convictions and nearly $3 million in wage restitution paid to wronged workers on Tuesday as they touted the state’s efforts to crack down on crooked business owners.

The state’s Wage Theft Task Force, made up of James’ office, the Department of Labor and local attorney districts, secured charges against a dozen businesses and aided 265 workers in recouping pay over the past two and a half years during the pandemic.

Construction companies and restaurant owners were among those convicted and those who agreed to make good after cheating employees out of pay.

The state is also expanding its efforts to make it easier for workers to file complaints with the launch of a new hotline and a yet-to-be-unveiled online wage theft reporting system.

The online portal, being run by the Department of Labor, will cost about $10 million and is set to be up and running by 2023. Officials said the system will not only streamline the filing of complaints but also provide agency with real time data, enhancing its ability to analyze and identify violation trends.

Among the violators named Tuesday was Brooklyn-based Lintech Electric. Back in April, James’ office announced that the company agreed to pay $900,000 in restitution to more than 200 workers after failing to pay prevailing wage and submitting false payroll documents while working as a subcontractor on several projects with the New York City Housing Authority.

The agreement bars Lintech from performing any public work in New York State for five years. The company also had to pay a $30,000 penalty to cover the cost of the three year investigation.

Other offenders include Paul Hurley, the owner of the now-closed Hurley’s Steakhouse and Pub in New Rochelle, Westchester County.

Hurley pleaded guilty in June to failure to pay wages, a misdemeanor, after cheating eight employees out of a total of $23,114.

As part of his plea agreement, Hurley paid full restitution to his victims and will be sentenced in September to three years of probation.

The restauranteur, who’s owned several Manhattan pubs and bars in the past and is the former president of the United Restaurant and Tavern Owners’ Association, previously admitted to stealing more than $100,000 from more than 50 workers back in 2015.

At the time, Hurley had to pay the full amount of back wages plus another $4,000 in unemployment insurance contributions to the state but avoided jail time.

“My message to unscrupulous employers is clear: We will not tolerate the mistreatment of workers,” Department of Labor commissioner Roberta Reardon said. “If you violate our labor laws, we will find you and hold you accountable. We will never stop fighting to protect all New York workers.”