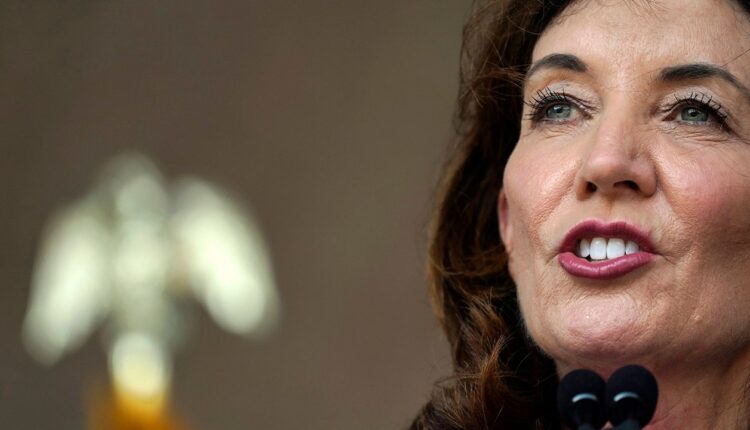 Check out what’s clicking on FoxBusiness.com.

The New York Department of Health has paid a total of $637 million for COVID-19 at-home tests to a company whose owner and his family have contributed more than $200,000 toward Gov. Kathy Hochul’s re-election.

State records revealed that the payments, first reported on by the Albany Times-Union, were not made as part of any government contract, which was confirmed by the state comptroller’s office.

“DOH entered into 3 purchase orders totaling $637.6 million which served as agreements with Digital Gadgets for medical supplies. These purchase orders did not come to our office for review and approval,” Jennifer Freeman, spokesperson for New York Comptroller Thomas DiNapoli, told FOX Business . “Of this amount, $600K was paid and subsequently refunded from Digital Gadgets to the state.”

Freeman noted that her office’s approval was not needed due to a coronavirus emergency order renewed by Hochul that suspended the oversight requirement and the routine process of competitive bidding.

Freeman said her office could not comment on the specifics of the arrangement since they never reviewed it. She referred such questions to Hochul’s office and the Department of Health, but neither immediately responded to requests for information.

The Times-Union’s report raises questions by citing state records that show that Digital Gadgets founder Charlie Tebele and his family have donated hundreds of thousands of dollars toward Hochul’s re-election. Indeed, records reveal that members of the Tebele family, all listing the same address, gave $201,550 to Friends for Kathy Hochul, plus an additional $9,850 in in-kind contributions. All of these were made beginning in November 2021, less than two months before the first payments were made from the state to Digital Gadgets.

FDA SAYS COVID PILL PAXLOVID CAN BE PRESCRIBED BY PHARMACISTS

Records show that three other people with the same last name, but at three different addresses gave a total of $77,000.

Prior to then, the only Tebele donation to Hochul was $2,000 in May 2021, when she was still lieutenant governor.

While Digital Gadgets has not responded to FOX Business’ request for comment, Charlie Tebele’s attorney Harlan Lazarus told the Times-Union that his client “never had a conversation” with Hochul about the orders.

A spokesperson from Hochul’s office defended the state payments to Digital Gadgets, telling FOX Business that they were part of a state effort to prioritize at-home testing, which were “considered scarce commodities” at a time of surging cases due to the COVID-19 omicron variant. At the same time, the spokesperson said, Hochul was pushing the testing of school children so that schools could remain open.

GET FOX BUSINESS ON THE GO BY CLICKING HERE

“The State contacted multiple vendors, and Digital Gadgets was the only vendor who was able to meet our needs within the shortened timeframe,” the spokesperson said, adding that Digital Gadgets successfully met New York’s needs in the time required. The company gave the government a quote of $26 per test kit (each containing two tests) for one purchase order and $23 per kit for a second order.

“Given the circumstances and the urgency of the situation, the State determined that the price was fair and it was in the State’s best interest to move forward with the procurement,” the spokesperson said.

The spokesperson referenced the state emergency order, which suspends certain rules for purchasing necessary services, technology and commodities, noting that the state has also purchased tests from seven other vendors.

Who specifically authorized the purchase orders remains an unanswered question.

Records show that Digital Gadgets made a separate arrangement to provide the state with personnel protective equipment (PPE) for $100,000, but that this was done under a formal government contract.