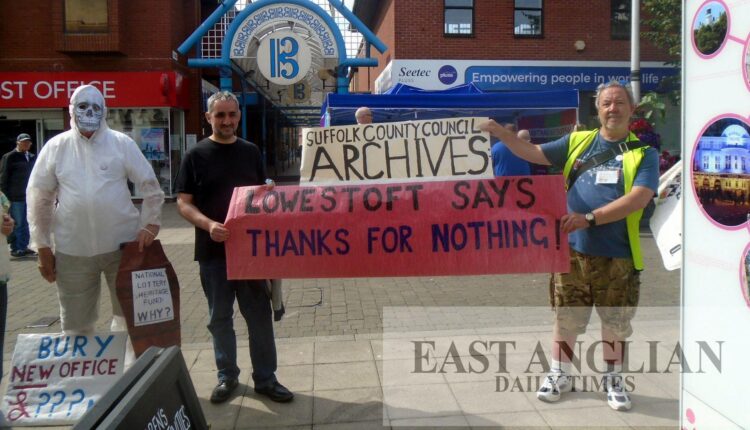 Angry heritage campaigners converged on a town center as they protested at a county council event.

For the past four years members of the Save Our Record Office (SORO) group have been campaigning against a decision made by Suffolk County Council to move historic archives from Lowestoft Record Office to Ipswich.

There was widespread anger, sadness and disappointment as the archives were controversially moved to the £20m The Hold at Ipswich in April last year.

The move, which the county council said was necessary for the long-term preservation of historic archives, sparked a 7,300 name petition, concerns from three Suffolk town councils and Waveney MP Peter Aldous as well as a storm of protests from heritage groups, historians and authors.

Last Thursday, the campaigners said the council had “seriously underestimated the level of anger and resentment” that remains in Lowestoft as they protested at a county council ‘listening’ event in the town centre.

With the county council hosting ‘Local Matters – We are Listening’ events across Suffolk this summer, as they speak with local communities about issues that matter to them, the Lowestoft event was attended by council leader Matthew Hicks and his deputy Richard Rout.

With members of the SORO group protesting opposite them, wielding placards and wearing skeleton suits, the campaign group highlighted the lack of archives service investment and public Record Office facilities in Suffolk’s second biggest town.

“Then they build a £20m vanity project at Ipswich Waterfront to house them.

“Now they are planning a new multi-million pound archives facility in Bury St Edmunds while Lowestoft is left to wither on the vine.

“All we now have left in Lowestoft is an empty husk, a signpost to Ipswich and a conveyor belt for archives users and donated material which takes it straight down the A12 to The Hold.

“If Suffolk County Council thought this problem was going to disappear when they removed our precious local archives then they have seriously underestimated the level of anger and resentment on the subject still felt by many in this part of the county.”

With the Local Matters – We Are Listening event in Lowestoft one of a series being held around Suffolk “to give the public an opportunity to meet councillors and officers face-to-face and discuss the issues that matter to them”, a county council spokesman said: “We have received excellent feedback at every event.

“In Lowestoft the issues raised were chiefly around what can be done to boost the town center – and economic development is a key objective of Suffolk County Council.

“Other issues were anti-social behaviour, litter and highways maintenance.

“All this feedback is relayed to the relevant teams at the council and is used to help shape future strategy and policy to deliver the best possible service to the people of Suffolk.”

As well as Mr Hicks and Mr Rout, the Lowestoft event was attended by local county councilors and Jon Lacey, the chief fire officer for Suffolk Fire and Rescue Service.

The county council spokesman added: “Members of the SORO group were in attendance at the event and made clear their opposition to the move of the county records service to The Hold on Ipswich Waterfront.

“They were perfectly entitled to do so and we respect their view.

“Councillors Hicks and Rout spoke at length to members of SORO and were more than happy to do so.

“The issue was not one raised with us by the members of the public we spoke to though.

“Our position is that The Hold provides an archive fit for the 21st Century and which serves the whole of Suffolk, safely housing the bulk of the county’s nationally and internationally-significant archives and providing a service which can better reach the whole of the community. “

CSEA members to get 13% pay hike in deal with state