gov. Hochul says New York cops have seized twice as many guns this year than 2021 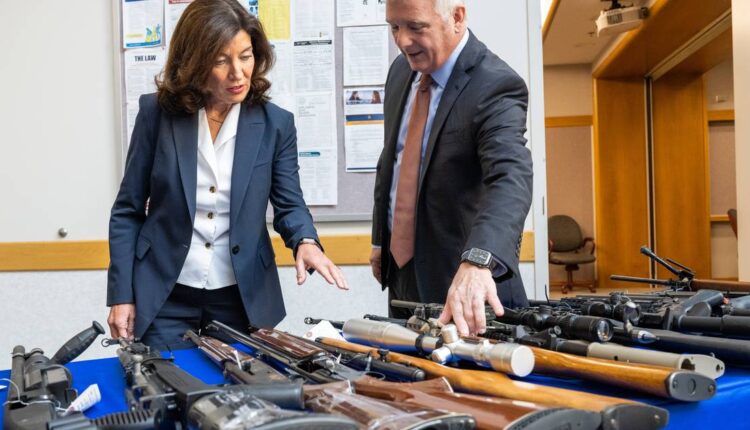 gov. Hochul said Thursday that the New York State Police have made progress in their push to crackdown on guns, seizing more than twice as many firearms this year as last year, as officials work to drive down gun violence rates that surged during the pandemic.

Entering the eighth month of the year, the state cops have snatched some 800 guns, a 104% year-over-year increase, Hochul said.

The governor, who is facing a November general election and is under pressure to curb crime, credited law enforcement’s laser focus on firearms for the “enormous increase” in gun seizures.

In New York City, where Mayor Adams has made gun violence a focus of his young administration, reported shootings have fallen this year by about 9%, according to Police Department data. Adams said Wednesday that the NYPD has seized more than 4,300 illegal guns this year.

Hochul said the state is “not resting on our laurels,” but expressed pride in the progress local law enforcement officials have made.

“This is success; it’s success today, but we are not stopping until we remove the specter of illegal guns off our streets,” the governor said. “New York City, Albany, Rochester, Syracuse, Buffalo, Binghamton — all of our communities are seeing challenges here.”

Hochul said the state government is putting an “unprecedented” financial investment into law enforcement efforts to flush firearms from city streets, citing $227 million in the state budget set aside for gun violence prevention.

New York is battling uphill on guns: the state’s restrictive concealed carry handgun law was voided by the Supreme Court in June, and deadly weapons continue to pour into the state from the so-called Iron Pipeline that carries guns from the South.

And New York has been rattled by a series of stunning shootings since Hochul took office last year.

In April, a gunman from the Midwest used a Glock 17 pistol to fire 33 bullets toward innocent passengers on a Brooklyn subway train, wounding 10 and terrifying the city, but killing none, according to authorities.

And in May, a hateful white teenager with an assault-style rifle massacred shoppers at a supermarket in a predominantly Black area of ​​Buffalo, killing 10 people.

Hochul pushed a bundle of strict gun bills through the Legislature in the spring after the Buffalo bloodshed. And she called lawmakers to a special session to address the Supreme Court ruling, signing another package of laws tightening state gun rules.

“It takes patience,” Bruen said. “It takes dedication, and you have to wait for it.”

Her Republican rival in the governor’s race, Rep. Lee Zeldin, has charged that Hochul has not pushed hard enough to reverse controversial aspects of the 2019 bail reform law.

The governor secured some bail reform tweaks in the spring, though Democrats in the Legislature balked at some of the changes she and Adams pushed.

“There is no one approach to dealing with something as complicated as crime,” the governor said Thursday. “We’re focusing on violent crime, gun violence here today — there’s also other quality of life crimes that continue.”

She added that the state amped up its anti-gun work in the fall. On the spring bail reform changes, she said: “It was not a small accomplishment, because there was much resistance — there was no desire to reopen this conversation.”

“I was not leaving and passing a budget that did not have the ability for judges to consider more factors,” Hochul told reporters, urging New Yorkers to give the tweaks “some time to work.”