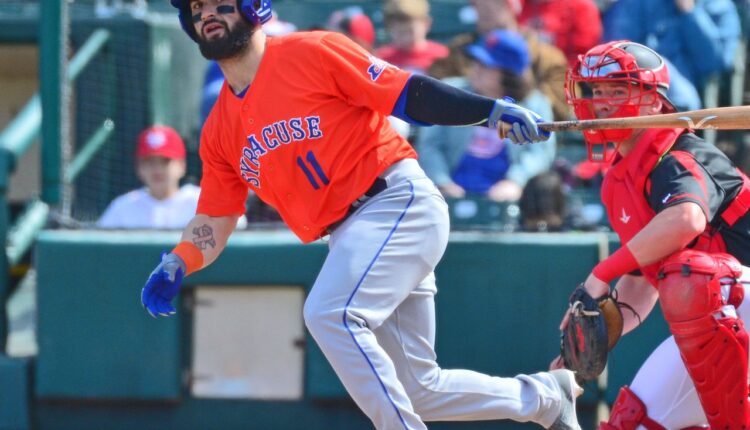 Buffalo, NY – The Syracuse Mets scored four runs in the top of the eighth inning to beat the Buffalo Bisons, 4-2, on Saturday night at Sahlen Field. With the win, Syracuse has secured a series victory, winning four of the first six games of this seven-game series against Buffalo.

Buffalo (43-40) scored the game’s first run in the bottom of the second inning. Stevie Berman was hit by a pitch to start the frame. Then, Cullen Large doubled to put runners at second and third base. After Chavez Young popped out, Nick Podkul grounded out to shortstop, but Berman scored on the play to give the Bisons a 1-0 lead.

Syracuse (36-47) held Buffalo’s offense in check after that point. Starting pitcher Nate Fisher didn’t allow a hit the rest of his outing. In all, Fisher pitched four and one-third innings while allowing just two hits and the one run. Stephen Nogosek then came out of the bullpen and pitched one and two-thirds scoreless innings with three strikeouts. Nogosek now has a 1.27 ERA in 21 and one-third innings pitched in Triple-A this season. Michel Otañez followed with a 1-2-3 seventh inning to keep the deficit at one.

The Mets offense broke through in the top of the eighth. Travis Jankowski singled, Kramer Robertson singled, and Francisco Álvarez was hit by a pitch to load the bases. Kahlil Lee then stepped to the plate and was also hit by a pitch to score Jankowski and tie the game up, 1-1. Nick Dini followed with a two-run single into right field that brought home Robertson and Álvarez to give the Mets a 3-1 lead. Gosuke Katoh put the capper on the inning with a single into right field that plated Lee to push the Syracuse advantage to three, 4-1.

The Bisons did respond in the bottom of the eighth. Spencer Horwitz led off with a home run that he crushed over the right-field wall to trim the Mets lead to two, 4-2. This is Horwitz’s first week in Triple-A, and the 24-year-old has gone 8-for-19 at the plate with three doubles and a home run, including a three-hit day on Saturday.

The home run to Horwitz was the only run that Mets reliever Trey Cobb allowed. The right-hander retired the next three batters in order. Then, Bryce Montes de Oca entered out of the Syracuse bullpen and pitched a 1-2-3 ninth inning with three strikeouts to secure his third save of the season and the 4-2 Syracuse win.

The Mets and Bisons conclude their seven-game series on Sunday. Right-hander Connor Gray is slated to start on the mound for Syracuse. First pitch is scheduled for 1:05 pm