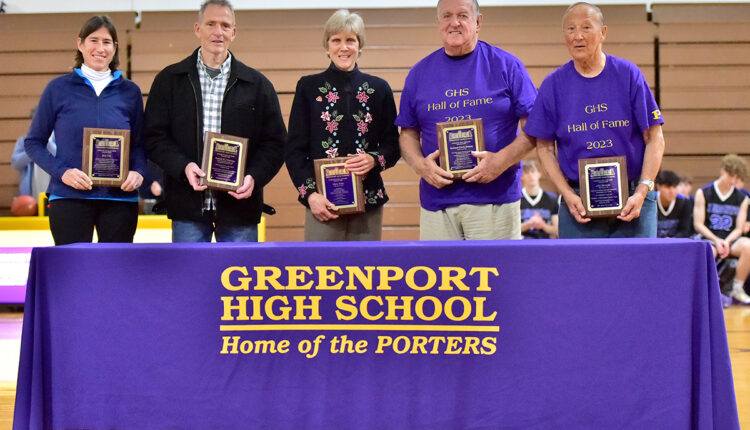 The inductees of the Greenport Hall of Fame were honored at halftime on Jan. 20 during a boys’ basketball game. (Source: Bill Landon)

“It was long overdue,” Toussaint said. “They left Greenport a long time ago, but as this is only our second ceremony, we have some catching up to do. It’s important to recognize their achievements and congratulate them on their careers. It is undeniable that these five are more than worthy of being recognized as part of our Hall of Fame.”

Skrezec, Greenport High School Class of 1958, was a four-athlete who excelled in football, baseball, basketball and track. He was a member of the 1957 All Scholastic team. Not only did he play varsity football for all four years of high school, but he never lost a game. The Porters went undefeated from 1955 to 1958. They also won the 1958 Rutgers Trophy, given to the most outstanding team in Suffolk County. After high school, he served four years in the US Army.

Breese, Greenport High School Class of 1958, was also a four-athlete. Breese and Skrezec played football, baseball, basketball, and track and field together. As a starting quarterback, Breese led the Porters to three football championships. He twice received All-County honors for his efforts on the football field. Breese was also a great basketball player. He was the first 1,000-point scorer in Greenport High School history and was named to Newsday’s All County First Team three times. As if that wasn’t enough, Breese played on two championship baseball teams and fought over the .300 for his career.

Kelly, Greenport High School Class of 1977, was one of the few All-American athletes in Greenport history. She received the honor three times – once for volleyball and twice for basketball. Kelly played all four high school years at the varsity level. She played basketball, field hockey, volleyball, and softball and became the most valuable player in virtually every sport she played. Kelly graduated from Indiana State University and continued her distinguished athletic career.

Kiernan was a popular baseball coach from 1971 when he started as a JV coach until he retired from coaching in 1987 as a varsity coach. He was unable to attend the ceremony but asked his favorite player he ever coached, Scott Klipp, to represent him. He had a profound impact on every player he coached, which was evident in the number of nominations he received. According to a booklet provided at the game, he had a winning record throughout his tenure as the Porters’ baseball coach.

Utz, heralded as the architect of the girls’ track and field at Greenport, was the last member in that introductory class. She was unable to attend the ceremony, so her niece, Mindy Ryan, accepted the award in her place. Utz started the girls’ field hockey program in 1973. A year later, she started the girls’ basketball program. Utz coached field hockey from 1973 to 1977 and basketball from 1974 to 1983. She won eight championships while coaching the basketball team and went unbeaten for six consecutive seasons. In 1982, the basketball team was crowned the Suffolk County Class D champions.