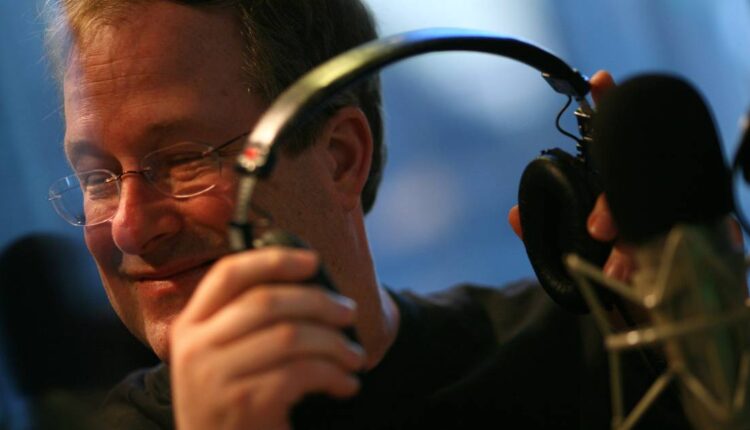 Chicago radio icon Lin Brehmer closed his last show Friday afternoon in the most Brehmer-esque way, telling a story before spinning a song that emphasized his point even more. Before playing the last song of his set, he talked about his first radio job in Albany, New York, in 1977 and a song on a double live album recorded at New York punk club CBGB that spoke to him at the time.

I had expected Brehmer to choose a well-known song with deep meaning to end his show, perhaps something by John Lennon or Pink Floyd. Instead, he chose the first track on that live album by the Tuff Darts called “All for the Love of Rock ‘n Roll,” which was most fitting.

Brehmer, who has been with WXRT-FM 93.1 for about 40 years and a host there for 30 years, recently announced that he would be taking a leave of absence to deal with a cancer recurrence after battling prostate cancer for several years. There has been a well-deserved outpouring of love from listeners, musicians and others from around the world.

I know Lin through mutual friends, and while we aren’t close friends, I can confirm that his on-air persona and his private personality are the same. He’s the guy who knows he has the coolest job on earth and is forever grateful.

It shouldn’t be surprising that Lin is the same on and off the air because you cannot survive 40 years in this town as a phony. His enthusiasm is real, both as a music fan and as a fan of life. His tagline, “It’s great to be alive,” is his mantra, and it’s contagious. I’ve never heard a bad word about Lin from anyone in this town.

For as good of a disc jockey as Lin is, he’s even a better storyteller, and XRT has capitalized on that for years through his “Lin’s Bin” segment, in which he tells a story about something that’s on his mind and then ends it with a song for emphasis. His “Lin’s Bin” musings are often humorous and sentimental and always poignant. The one that stands out the most for me is the one he delivered on Oct. 22, 2016, the day the Cubs would go on to win the National League pennant for the first time since 1945. In it, he talked poetically about baseball, the long-suffering Cubs fans and the bond between fathers and sons. It made me cry, and later that evening, before going to the pennant-clinching game with my father, we ran into Lin at the Gman Tavern near Wrigley Field.

I told Lin that his “Lin’s Bin” segment that day brought tears to my eyes, and he smiled, replying, “That’s what I do. I make grown men cry.” During his last show on Friday, he even spoke of requests that he’s received lately to autograph tissue boxes.

XRT DJs have a unique relationship with their listeners, and Chicagoans who are fans generally seem to know how lucky they are. No radio station here had a lineup as loved as XRT’s. Perhaps it’s because several of the DJs have been on for decades and connect as real Chicagoans to real Chicagoans. DJ Marty Lennartz, the die-hard Cubs fan who also does movie reviews as “The Regular Guy” comes to mind immediately. But several XRT DJs have either left or scaled back. And each time one has exited, it feels like the end of an era.

When Terri Hemmert announced in 2019 that she was leaving her midday shift during the week to only do her “Breakfast with the Beatles” show on Sundays, it was a huge blow to many listeners. When XRT morning news co-anchor Mary Dixon was ousted in late 2019 after her job was eliminated, it was another hard knock. Luckily, she landed at WBEZ-FM 91.5 soon after, but it was still a loss to the XRT faithful.

But nothing has compared to what’s transpired since Lin announced that he was taking a leave. The man who describes himself on-air as “your best friend in the whole world” was leaving to battle the dreaded C-word. This prompted an ongoing outpouring of love. As one mutual friend told me, if anyone can beat the disease, it’s Lin, who is surrounded by the love of the world right now.

Even without demographic data, I think it’s safe to say most of XRT’s avid listeners are 40 and older. Radio listeners overall are dwindling because of the draw of streaming services. But most who listen to XRT are well aware of this and grateful that we have had one of the best stations in the country, with the best DJs for years.

On Friday, Lin didn’t do a “Lin’s Bin” segment. Instead, he seemed to speak to the listeners through the songs he played. Whether it was obvious with Pearl Jam’s “Alive” and The Killers’ “When You Were Young,” or the message required that you pay attention to the lyrics, it was all there. Muddy Waters singing “everything, everything’s gonna be alright” in “Mannish Boy,” Caamp singing “I believe in you, baby, and I’ll always be around” in “Believe” and Joni Mitchell singing about life and love in “Both Sides Now,” which even Lin admitted on Friday got to him. Those were just a few.

Lin ended the show by thanking his fans and reminding everyone to “take nothing for granted. It’s … great to be alive” — while, without a doubt, making more than just this listener cry.

Submit a letter, of no more than 400 words, to the editor here or email [email protected]