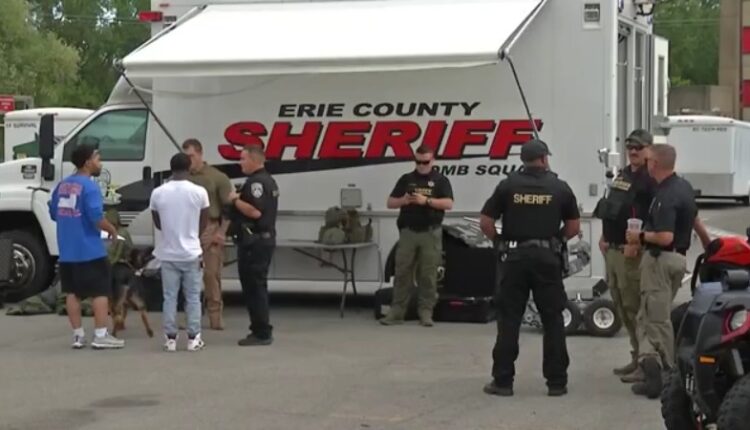 BUFFALO NY (WIVB) — As local law enforcement faces more danger in the line of duty, the need for new officers across Erie County continues to grow.

“Over the past couple of years there’s been a lot of hate for them and it’s always been my passion, or thought it would be my passion, to go into law enforcement,” said Jordan Lewis, who attended a recruiting event Monday. “I’d rather be part of the change then sit on the sidelines and complain about things that are going on.”

Lewis was one of more than a dozen people who stopped by the Erie County Fire Training Academy in Cheektowaga for an opportunity in law enforcement.

Police officials say nowadays, being an officer is no easy task.

“There’s no doubt there’s inherent dangers in police work, right? Those are one of the dangers, getting shot at, getting hurt, but those are things we teach you how to defend against also,” said Brian Britzzalaro, the Erie County Sheriff’s Office Special Division Chief.

On Sunday, Buffalo Police officials released a statement saying in the last three months there’s been three cases where suspects shot at police.

In March, one man led Buffalo Police on a car chase through the city into Cheektowaga, where he shot at officers. Last month, a Buffalo man fired at police officers near Broadway and sears street. Then this past weekend, near E. North and Orange streets, a 36 year-old man shot at police.

“It’s challenging right? I mean law enforcement can be a challenging career and I think it’s challenging across the country,” Britzzalaro said. “But I’ll tell you, I’ve been doing this for 23 years now and it’s the most rewarding profession what this job is at its base core is helping people.”

Raven Sayles says that’s why she wants to be an officer — to help people.

“This is my city. I know my city. I know the streets, I know the people and I’m here to help,” she said. “Even when I’ve dealt with officers they don’t take the time to listen and that’s a lot of the problem. So if we get more officers out here that are willing to listen then we might see a change in the community.”

For more information on how to apply, click here.

Sarah Minkewicz is a reporter who has been part of the News 4 team since 2019. See more of her work here.

When Will AEW Return To Philadelphia?