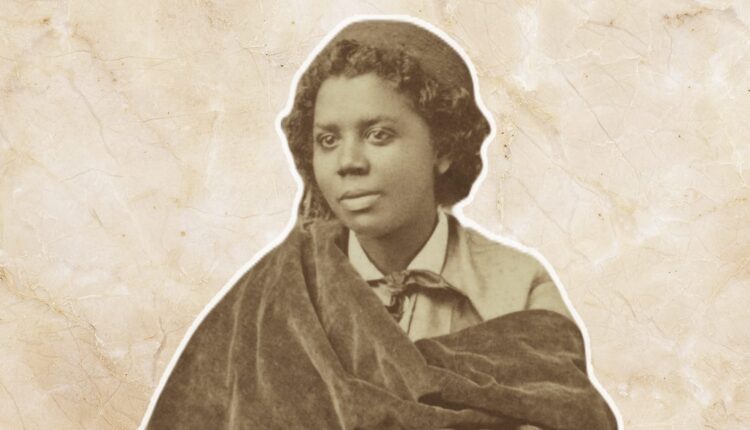 Edmonia Lewis thought she had found her place. It was the 1860s in Ohio, and she had enrolled in Oberlin College, an institution with a reputation for progressive thinking that welcomed women and marginalized groups—both traditionally shunned by higher education.

Lewis, who was of Black and Native American descent, struggled with discrimination relating to her gender and ethnicity. Oberlin promised a respite from it. Instead, her time at college became the most trying period of her life. Whatever philosophies Oberlin’s administrators espoused had little to do with the racism that flowed through the country and down through the school’s hallways.

Two white students accused Lewis of slipping drugs into their drinks. When that matter was settled, she was then abducted and beaten in an apparent retaliation for the alleged poisoning. After Lewis recovered, more tumult followed: She was accused of stealing art supplies and prevented from registering to complete her final semester.

The trials would make—not break—her. Learning the craft of sculpting, creating work, and expressing herself through sculpture became her life’s work. Rather than be cowed by the prejudices of the era, Lewis shaped her own identity in clay and marble, moving beyond her tumultuous experience to become one of the most renowned sculptors of the 19th century.

Edmonia was the middle name of May Lewis, who was born in 1844 near Albany, New York. A lack of record-keeping—and Lewis being an unreliable narrator of her own life—makes it hard to make conclusive statements, but it’s widely believed she was born to a Black father and a mother who was part Chippewa.

After her parents died (the cause is unknown), she was raised by her aunts and cared for by a half-brother who had the financial means to give her a good education. She wound up at Oberlin, where the promise of a quality education was marred by her experiences. After she was accused of poisoning two white students, prominent attorney (and Oberlin graduate) John Mercer Langston agreed to defend her on the charges and garnered an acquittal due to a lack of evidence. The beating she received by unknown assailants while awaiting her arraignment was said to have been so severe, her kidnappers had left her for dead. The continued accusations of theft led Lewis to leave Oberlin; it was clear the situation was only going to get worse.

She traveled to Boston to continue her study of art and sculpture, where noted sculptor Edward Brackett spotted her innate talent and offered to train her. While in Boston, Lewis crafted medallions of noted abolitionists, learning what she could despite not being able to afford the anatomy classes that were typically open to white male sculptors. She used Brackett’s bust of John Brown as a model for the medallions she sold.

Her ultimate goal was to head to Rome—the hub of some of the best sculpting work being done at the time—to pursue work in the neoclassical movement, which saw artists embracing the approach of the iconic Greek and Roman sculptors. Lewis was able to accomplish that when copies of her bust of abolitionist and Civil War Union Colonel Robert Gould Shaw (a white officer who led a Black regiment and died during the war) sold at a price high enough to pay her travel expenses.

In Rome, Lewis found opportunity and mentorship, but also had to tread carefully. While many sculptors had a team of assistants to help when carving stone, they avoided them, afraid critics might assign too much credit or charge the work wasn’t hers. But she couldn’t escape all scrutiny: People criticized her decision to live in a commune with other American (and white) sculptors. Author Henry James (The Turn of the Screw) observed that Lewis’s skin color, not her talent, “was the pleading agent of her fame.”

Indeed, many portraits of Lewis in the media focused on how unusual it was to have a Black woman sculptor on the scene. The condescending portrayal annoyed her—Lewis said she had moved to Rome to avoid such misguided scrutiny. “I was practically driven to Rome,” she told one reporter, “in order to obtain the opportunities for art-culture, and to find a social atmosphere where I was not constantly reminded of my color. The land of liberty had no room for a colored sculptor.”

It’s possible Lewis grew so disenchanted with such mischaracterizations that she began to toy with her own biography, sometimes claiming she first became interested in sculpture when she saw a Benjamin Franklin statue in Boston and decided it would be fun to make a “stone man” herself . Other times, she claimed she grew up fishing and living off the land. If people wanted to assume Lewis was uneducated or naïve, then she appeared willing to provide fodder for it.

But even a cursory look at Lewis’s efforts revealed they were informed by talent, drive, and an incredibly personal ambition. One of her key pieces during this period was Forever Free, which depicts a Black enslaved man holding his arm aloft, broken shackles dangling from his wrist. Busts of Abraham Lincoln and Henry Wordsworth Longfellow followed. Lewis, a converted Catholic, also produced pieces with religious resonance, including busts of Jesus Christ and Madonna and child.

In time, Lewis’s work spoke loudly enough for her that few could dismiss it. In Rome, she was visited by Frederick Douglass and Ulysses S. Grant. One piece could earn her thousands of dollars—a hefty sum in the 19th century.

But Lewis’s defining work would come when she returned to the United States in time for the country’s centennial.

‘The Death of Cleopatra’ caused a stir. / Anna Moneymaker/GettyImages

Lewis had admirers in the States, and would often travel back to arrange for sales of her pieces. For the 1876 centennial in Philadelphia, she debuted The Death of Cleopatra. It was, aesthetically, a triumph—a 3000-pound study that commanded the eye. Like most good art, it was also celebrated and vilified in equal measure.

The Death of Cleopatra depicts the Egyptian queen in the moments following her demise, one naked breast exposed from her clothing. Critics charged that it was morbid and tasteless; others considered it a highlight of the centennial’s art exhibition.

For Lewis, it was a feeling of vindication. At the exhibition, she saw other works rejected by the committee. When Cleopatra was unboxed, she froze. “I scarcely breathed,” she said. ”I felt as though I was nothing. They opened the box, looked at the work, talked together a moment, and then I heard the order given to place it in such a position.”

After her success at the centennial, Lewis continued to create and travel, drawing inspiration from her locales. She moved to Paris in 1896, and then to London in 1891. She remained there until her death from kidney disease in 1907.

While heralded in life, Lewis’s death seemed to quiet her supporters. Her grave was unmarked, and many of her works were lost. Those that surfaced were sometimes found to have been neglected. In 2003, Sotheby’s auctioned off Night, a sculpture of two slumbering infants said to have been heavily stained with nicotine. The Baltimore Museum of Art purchased it for $130,720.

In 2015, Lewis’s bust of Jesus was discovered in a cupboard in Scotland. It had once belonged to John Patrick Crichton-Stuart, the 3rd Marquess of Bute, who was an admirer of Lewis’s around the time she sculpted the piece in 1870. (Crichton-Stuart was Catholic and a staunch advocate for women’s rights, which likely led to his support.) The bust remained in private hands until just a few years ago, where its discovery helped lead to renewed interest in Lewis and her work.

Incredibly, the death of Cleopatra had a far more ignoble fate. After it was exhibited at the centennial, Lewis couldn’t afford to ship the massive piece back to Rome and had to leave it behind. Without being in the care of an art lover or collector, the sculpture wound up in a saloon, then was later used as a marker for a horse’s grave at racetrack, where graffiti was covered up by common house paint. Lewis biographer Marilyn Richardson eventually tracked the piece down in a suburban shopping mall’s storage room; after its rescue, the sculpture was eventually sent to the Smithsonian.

This year has also seen the release of an Edmonia Lewis postage stamp as part of the USPS Black Heritage Stamp series in concert with the Smithsonian American Art Museum. Whether more of her work is discovered or not, it seems the world is no longer likely to forget the contributions of Edmonia Lewis.