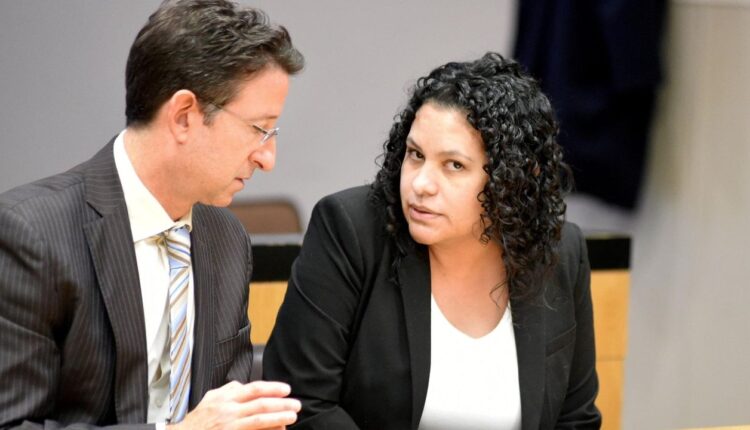 A Central Islip woman was convicted Tuesday of murdering her longtime boyfriend and forging his will to inherit his two Long Island homes.

A Suffolk County Court jury of seven women and five men found Donatila O’Mahony, 42, guilty of second-degree murder in the March 2020 shooting of Lee Pedersen in Aquebogue. She was also convicted of second-degree possession of a counterfeit instrument and attempted grand larceny, second-degree.

“The motive for this murder was pure and simple greed,” Suffolk County District Attorney Ray Tierney said in a statement. “O’Mahony befriended the victim and then made a conscious effort to steal his estate. The jury found this defendant guilty and hope that the victim’s family will receive some justice now that they know his killer will be held responsible for their actions.”

O’Mahony faces a 25-year sentence for murder when she is convicted on February 28 in state Supreme Court Justice Timothy Mazzei.

The guilty verdict, which was announced just after noon on Tuesday after eight hours of jury deliberation over two days, ended a nearly three-year case that began when Pedersen’s lifeless body was found at his home with a gunshot wound to the back of the head. The case hit a stumbling block when, after testimony had been completed, a first trial in October declared a mistrial.

During the two-week testimony that ended Friday, O’Mahony was described as a young widow with a talent for manipulation. She had inherited $1.5 million when her first husband died suddenly in 2017, but she needed cash at the time of the murder, Assistant District Attorney Frank Schroeder told jurors.

Evidence at trial revealed that the body of 69-year-old Pedersen was discovered at his home in Aquebogue on March 8, 2020. Several items, including Pedersen’s phone and cash, were missing from the home, prosecutors said.

Investigators used cellphone recordings and surveillance video, as well as witness interviews, to build the case against O’Mahony, who asked a friend to buy two handguns for her in 2019, witnesses testified in court. Prosecutors and witnesses said O’Mahony had a sometimes sexual relationship with both older men and manipulated them into doing things for her. She borrowed the other man’s car the night of the murder, and he later scattered parts of the gun used in the murder in dumpsters in his New Jersey neighborhood, according to trial testimony. The other man, George Woodworth, 73, of Patterson, NJ, is scheduled to receive a reduced sentence on gun-related charges in exchange for testifying.

Investigators found Pedersen, who had no close living relatives, and O’Mahony’s DNA on a bag containing a spent cartridge case and bullets found at Woodworth’s home, according to evidence presented in court.

Suffolk County Police Department investigators are responding to the scene of the shooting of Lee Pedersen, an aquebogue man who was found dead at his home on Pine Avenue. Photo credit: Stringer News Service

Detectives questioned O’Mahony shortly after Pedersen’s body was discovered with a single gunshot wound to the head. She later called a detective several times, asking if investigators had ever found Pedersen’s last will and testament, which witnesses said left her his main home in Lynbrook.

While police found a will at a location provided by O’Mahony, they did not share that information with her, and she later forged a new will, which she left with his two homes, prosecutors and court witnesses said. Two witnesses testified that they had fraudulently signed the will.

Defense attorney Ira Weissman admitted in court that O’Mahony produced the forged will, but said she was not responsible for Pedersen’s death. While saying he was disappointed with the outcome of the case, he commended the jury for their patience.

“You have to appreciate a jury that takes the time to review the evidence,” Weissman said.

O’Mahony was arrested at JFK Airport in December 2020 on charges of forgery and grand larceny. She was charged with murder the following March, almost a year after Pedersen’s death. At the time of her arrest, O’Mahony had a one-way plane ticket for her and her 5-year-old daughter to her hometown of El Salvador.

Jim and Lorraine Roth, of Lynbrook, survived much of both trials to represent their neighbor, whom they described as loved on their narrow street.

“We are relieved, we are happy,” said Lorraine Roth about the guilty verdict.

Grant Parpan covers Suffolk County and federal courts for Newsday. He is from Long Island and joined Newsday in 2022.