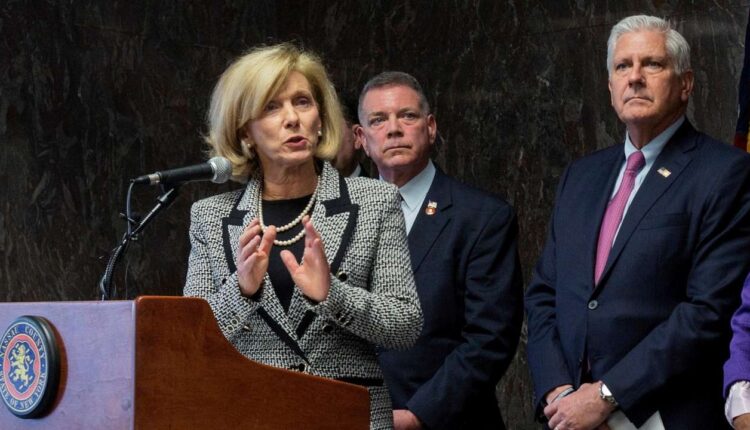 Nassau County finished 2021 with a $27.2 million budget surplus, recording a third straight year in the black due in large part to higher than expected sales tax revenues, according to a new report from the Nassau County Comptroller’s Office.

The report noted the county collected $362.2 million more in sales tax revenues than it had budgeted for the year.

The surplus also stemmed from a temporary infusion of federal pandemic relief money and savings from debt refinancing, the report said.

“The county is in very good shape, financially, at this moment,” said Adam Barsky, chairman of the Nassau Interim Finance Authority, which controls Nassau County finances.

County Executive Bruce Blakeman and County Comptroller Elaine Phillips, both Republicans, last week cited the consecutive surpluses in calling on NIFA, which was created under state law, to relinquish its oversight of county finances.

“There is no reason why NIFA should be in control of any aspect of the county’s finances,” Blakeman told Newsday. “Now, we are probably the most solvent county in the United States.”

“According to the statute, I do not believe that Nassau County should be under a control period,” Phillips said. “The county is in very solid financial condition.”

Barsky noted long-term challenges, such as the cost of future labor contracts with major county unions.

“It’s a question of how are they going to use [the surplus] funds going forward in a way to bring about structural balance” to the budget, Barsky told Newsday.

“It all depends on how do they utilize this windfall that they have,” Barsky said.

“That remains a significant risk for the county that we’re keeping our eye on,” Barsky said of the debt guarantee. “And it’s one of the reasons we wouldn’t let them [Nassau County] exit the control period until there’s clarity around the plans for the hospital.”

Phillips said fiscal issues at the hospital represent “a serious ongoing concern,” but argued: “Purely from a financial standpoint, the $131 million that the county would be obligated … It’s not a number that the county could not absorb.”

NIFA was created to oversee Nassau County finances in 2000 after the county had suffered a series of annual budget deficits.

As part of its mission, the state board was assigned to help Nassau restructure hundreds of millions of dollars in outstanding high interest debt.

NIFA implemented a “control period” on Jan. 26, 2011, during the administration of former County Executive Edward Mangano, a Republican.

NIFA officials, in instituting the control period, cited the county budget deficit of more than 1%, a trigger in the state law.

During a control period, NIFA’s seven-member board can reject county borrowing, vendor contracts and annual county budgets; issue orders to certain county officials; and impose a wage freeze for the county workforce.

Barsky said the decision about ending a control period rests with the NIFA board.

“Ultimately, it’s a decision for the board to make based on many, many factors,” he told Newsday.

“It doesn’t sound to me that it makes a lot of sense for the county to go into a control period, then out, and then right back in again,” Barsky said.

“I also question how the county will fare in the absence of NIFA,” he said.

Barsky said the control board has played a key role in improving Nassau’s finances by “rejecting unbalanced budget plans and borrowing for settlements and one-time expenses, and the [debt] refinancing that saved Nassau from massive deficits during the pandemic.”

Suffolk County, which does not have a state control board, reported a surplus in its unassigned fund balance of $192.4 million in 2021.

As in Nassau, that was due largely to higher than expected sales tax receipts, which totaled $1.836 billion, according to a report from the Suffolk County Comptroller’s Office, an increase of $346.8 million over 2020.

The sales tax figure exceeded budget expectations by $344.5 million, largely due to increases in internet sales, the price of vehicle fuel and household energy costs, according to the recent report.

Scott Eidler covers Nassau County government and politics for Newsday. Scott has worked at Newsday since 2012 and previously covered municipal government and education.

These are the fastest cooling real estate markets in the US