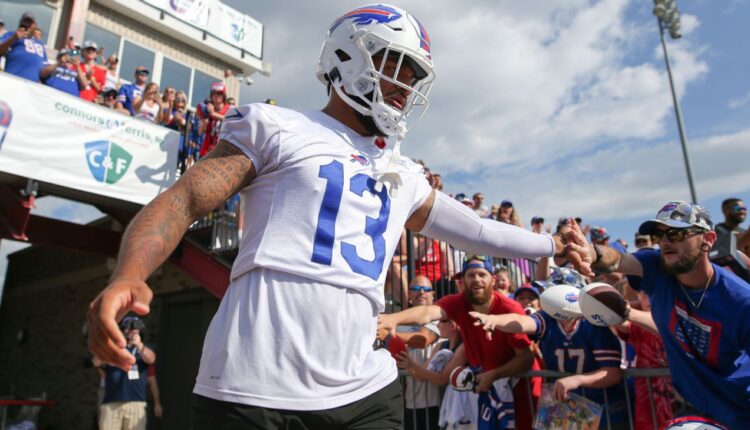 PITTSFORD, NY — Buffalo Bills wide receiver Isaiah McKenzie loves getting in his teammates’ ears and finding ways to get on their nerves. Fellow receiver Gabe Davis, whom he considers a brother, is no exception.

“He could run a hell of a route and catch the ball or whatever, and I’m like, ‘Yeah, Gabe, but you gotta tuck the ball,'” McKenzie said. “He’s like, ‘Tuck the ball?’ He gets mad at that. Anything with him will set him off.”

But McKenzie also likes to repeatedly tell Davis something on the positive side: “I want to see [you] get paid a lot of money.”

For Davis to earn a big payday down the road — he has two years remaining on his rookie deal — the 2020 fourth-round pick needs to capitalize on an expanded role in the offense. Over the last two years, his 125 targets ranked third on the team but lagged far behind Stefon Diggs (332) and Cole Beasley (220).

Now, with Beasley and receiver Emmanuel Sanders gone, expectations have risen. The Bills need him to step into the No. 2 wide receiver role and perform consistently alongside Diggs and McKenzie, who is putting together a strong training camp, and the rest of the offense.

The 23-year-old is not as expressive as McKenzie but is someone teammates naturally follow, and wide receiver coach Chad Hall has challenged Davis to be a more vocal leader.

“Now he’s just got more of a responsibility,” Hall told ESPN, “finally being in a position where he’s got the ability to start, which he could have started all three years.”

Bills receiver Gabe Davis is poised to take a much larger role in the offense. AP Photo/Joshua Bessex

It took until the season’s second half for Davis to get significant reps last year, despite the impact he made when he was on the field (a team-high 15.7 yards per reception). After five targets and two receptions, including a touchdown, in Week 1, he did not have a game with more than two targets from Weeks 2-6.

Frustration crept in, but he didn’t complain. “You just got to wait, it’ll be there. Just be ready,” Hall told him.

“I feel like patience is the key in this game. It taught me a lot these past two years. I’ve learned how to have it,” Davis said. “At the time that I had to sit back and watch. I learned from a lot of great players.”

When opportunities came, especially in the second half of the 2021 season, he took advantage.

Choose your league size, customize the scoring and set the rules you want to follow in order to create the fantasy football league you want to play in.

Create your custom league for free!

Then, Davis introduced himself on the national stage, catching four touchdowns in the team’s divisional round playoff loss to the Kansas City Chiefs. He scored only two more touchdowns in the regular season than he did in one January night at Arrowhead Stadium.

“I wasn’t surprised of anything that he did that game,” Diggs said. “He had a hell of a game. But right now, Gabe is having a hell of a career if you consider for a young guy … and that second year all he did was make the second-year jump, to me at least .”

Despite Davis’ limited opportunities in 2021, quarterback Josh Allen showed he liked to look in the end zone for the 6-foot-2 Davis, who finished last season tied for eighth in the league in end zone targets (13).

Davis acknowledged that he’ll be getting “a lot more snaps than I’m used to,” and general manager Brandon Beane has noted how hard the wide receiver has been working. Hall points to Davis’ work in becoming a more complete route runner without any indicators giving away his route as a strength for him. The receiver hasn’t taken any vacations or days off this summer. McKenzie said Davis is in the gym at 6 am every morning despite it not opening until 7 o’clock.

Will Davis be able to step into the larger role?

“At the end of the day, it’s going to come up to, 1) the mental, can he handle the mental workload? And then 2) how hard you work at it,” offensive coordinator Ken Dorsey said. “And for Gabe, he’s got both those qualities at an extremely high level.”

Skin Cancer Is a Risk No Matter the Skin Tone. But It May Be Overlooked in People With Dark Skin.