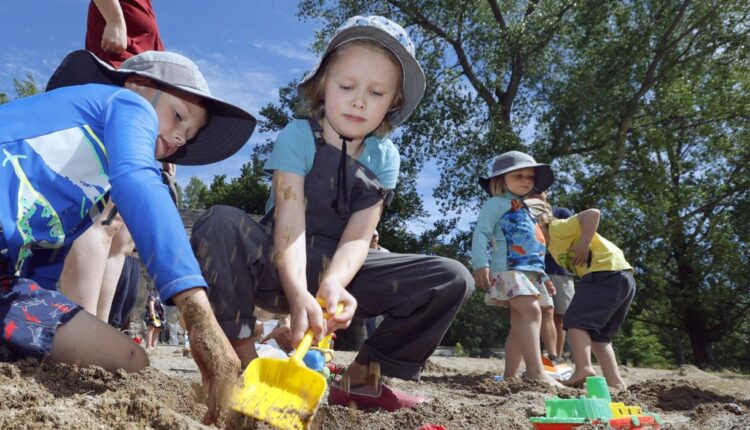 GLYNDON, Minn. — Parents may not know exactly what to expect when they bring their young children to Prairie Preschool, but they do know it will be a fun, engaging and educational experience.

The program, led by Minnesota Department of Natural Resources Naturalist Paula Comeau at Buffalo River State Park near Glyndon, is aimed at fostering an early love of natural sciences and the outdoors through storytelling, play, activities and short walks.

Alicia Emerson, of Fargo, said the program is perfect for her six-year-old son, Finn, because both of them are nature lovers.

“You learn so much from the nature hikes, … identifying the different plants and things, and it’s something different every week,” Emerson said.

“I like how it’s really hands-on and just really engages them and all their senses,” Olson said.

At a set of picnic tables in the park, the program often starts with a story about the subject matter at hand, whether it’s animals, insects, birds, plants or the environment.

On Thursday, July 14, the focus was water and rivers.

The dozen or so children and their parents in attendance heard the story “Fish is Fish” by Leo Lionni, about a minnow and a tadpole who are inseparable until the tadpole grows legs and decides to explore the world beyond the water as a frog.

Comeau asked the group, while a frog can live on both water and land, can a fish do the same?

“No, not land, just water,” said one child, smartly.

The young naturalists then went to a sandy area of ​​the park to build a river, like where the frog and the fish lived in the book.

Using their hands and little plastic tools they’d brought, the little ones dug a channel and watched what happened when small, then larger amounts of water were poured at the mouth.

Next, Comeau led the group to a footbridge over the Buffalo River to learn about currents by throwing small sticks into the water to see whose stick traveled downstream the fastest.

Seth Archer and his wife, Jennie, of Fargo, brought their two-year-old son, handing him two twigs to toss in the water.

Both “English nerds” in their jobs at Concordia College, Seth Archer said they like the experiential learning style for their son. Participants in the Prairie Preschool program watch the flow of the Buffalo River at Buffalo River State Park in Glyndon on Thursday, July 14, 2022.

“They bring this scientific context. They talk about it like scientists, which is something that he doesn’t necessarily get,” Seth Archer said.

He said this kind of early childhood programming seems stronger and more available in Minnesota than in North Dakota, where his family lives.

Kids of all ages are welcome at Prairie Preschool, but the lessons are designed for early learners, ages 2 to 6.

There is no need to register for the free, hourlong drop-in program, but a Minnesota state park daily or annual vehicle pass is required, and children must be accompanied by an adult at all times.

The next sessions of Prairie Preschool are scheduled for Thursday, July 21, and Thursday, July 28, from 10:30 to 11:30 am both days, according to the Minnesota Department of Natural Resources website.

New Orleans among the costliest cities to commute to work