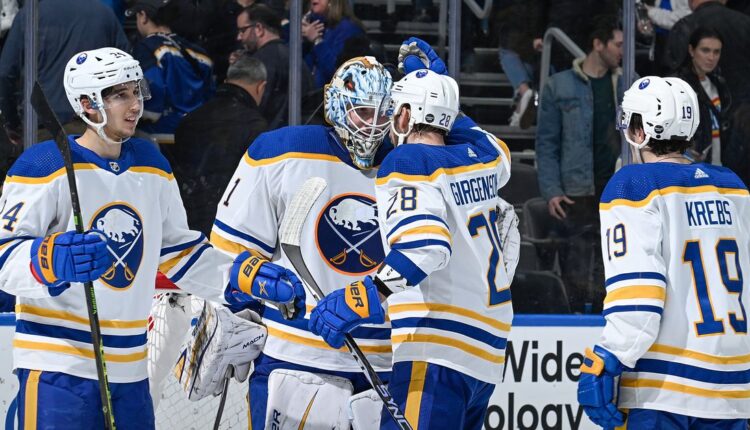 Just a minute into the first half, Jeff Skinner found Blues goalie Jordan Binnington, who was assisting Thompson and Okposo, with a shot from his wrist. It was Skinner’s 20th goal of the season and his second in five games.

Other Sabers forwards, most notably Tage Thompson, have passed Skinner in the points department. TNT have already scored 33 goals this year, so it’s great to see No. 53 improving his offensive performance.

Not to be outdone, Alex Tuch scored his own goal just 25 seconds after Skinner’s wrist hit to give Buffalo a 2-0 lead. It was Tuch’s first goal since January 19 and his 23rd in 2022–23. The Skinner-Thompson cloth line was firing on all cylinders tonight. Keep it up guys.

Nhl.com combined the first two Sabers goals into one video. Here you are:

The Sabers have two offensive defenders on their roster, Ramus Dahlin and Owen Power. Both D-men are as comfortable pucks in the net as they are at preventing your opponent from getting too close to your own.

Dahlin has been making a few plays lately, but tonight it was Power’s turn. Midway through the first third, No. 25 scored the tip-in to give Buffalo a 3-0 lead. It was Powers 2nd of the season and in consecutive games. Power continues to show why he is such a huge asset and why the team were lucky enough to pick him No. 1 in 2021.

Jedi13 had them Game comment: “The RAGIN’ TAGIN!” 1:10 into the second period, Tage Thompson got a backhander past Binnington to give the Sabers a 4-0 lead. TNT’s 33rd of the year put the Blues in a hole they couldn’t fully climb out of. TNT is now just five goals away from breaking last season’s record.

Plus 5: Cozens is breaking up

Unfortunately for the Sabers fans, the Blues didn’t give up easily after losing 4-0 early in the second. Barbashev and Schenn each scored within the next seven minutes to cut Buffalo’s lead to 2. Then, 47 seconds into the third period, Jordan Kyrou made it 4-3 for Sabers.

The Blues increased the pressure and after drawing their goalkeeper, the referees penalized Peyton Krebs with a ridiculous delay of the game foul. With a 5-on-3 going, it looked like a St. Louis equalizer was almost inevitable.

However, Dylan Cozens saved the day by stealing the puck from St. Louis forward Vladimir Tarasenko and scoring an empty net to squash the Blues’ comeback hopes. Cozen’s 17th this season was great to see and came just when Buffalo needed it most.

Minus 1: Refs ignore boarding on cancer

The Zebras not only left Krebs in the pits when the Blues already had the man advantage, but completely ignored what should have been a boarding penalty when St. Louis forward Niko Mikkola Krebs ganged right in front of a referee banged.

The officials ignored Mikkola’s action but then penalized both No.77 and Kyle Okposo as the two went into action after Mikkola’s dirty goal. No punishment for beating cancer. If the NHL wants Sabers fans to believe the solution isn’t there, they’ll stop being momentarily blinded by opponents getting away with cheap shots against Buffalo.

Meanwhile, the umpires gave Rasmus Dahlin a 10-minute penalty for complaining about a no-call during the Chicago Blackhawks’ last game. When will the double standard ever end?

While the Sabers can score goals, they have a harder time staying ahead. Too often they go off the gas early and let other teams come back into the game. 4-0 was almost not enough to beat a unit from the St. Louis Blues, which is ranked sixth in the Central Division and has lost three of their last five duels.

The Buffalo Sabers are in the hunt for a playoff spot and hoping to end their postseason drought for the first time since 2011. It’s great that they held on to victory, but Blue and Gold make it harder than it needs to be and fight to complete tough competitions. If they want to compete in May, they’ll need to play more consistent hockey in the final months of the regular season.

The Sabers take on the Jets tomorrow night at the Canada Life Center in Winnipeg. Puck drop is at 8pm