A Miracle on 14th Street 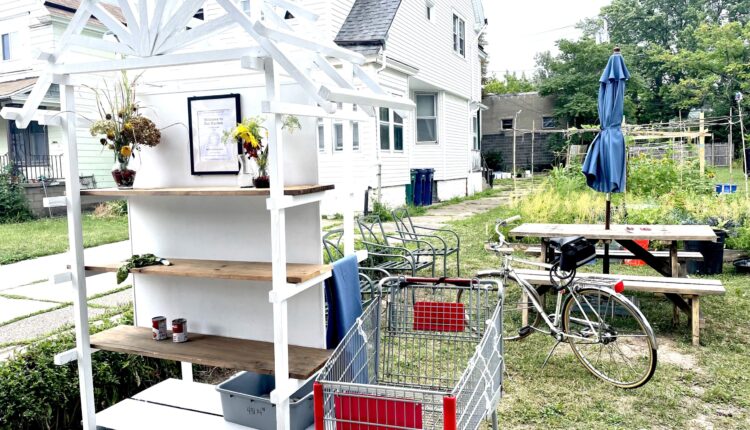 In life, there are people who are givers, and who are takers. Then there are the people who give so much, that it makes you wonder how they can even have so much to give. Take Elizabeth Meg Williams, for example. Elizabeth was best of friends (and housemate) with beloved Buffalo creative Jonathan Casey, an inspirational soul that we lost during the pandemic. Elizabeth also happens to be a giver extraordinaire.

Upon Jonathan’s passing, Elizabeth decided to pick up the reins, to honor her friend’s legacy – as a person who not only loved Buffalo, he deeply loved the families in his neighborhood. It just so happened that the families living on his street – 14th Street – were mainly refugees, most of whom didn’t speak English. While most people remember Jonathan for his concrete design business (Solid 716), few understood the impact that he had on his neighboring refugee community.

It was Jonathan who first opened his home to 14th Street refugee families. First it was the kids, who would come over to use his computer, play in the yard, take naps on the couch, etc. It was Elizabeth who witnessed firsthand these selfless acts of kindness. When Jonathan passed away, Elizabeth knew that she had to keep the momentum going… and growing.

During a recent visit to the neighborhood, Elizabeth toured me around a community garden at 431 14th Street, a couple of doors down from her home. Although the land is owned by PUSH, Elizabeth has a Memorandum of Understanding (MOU) on the property. She is in the process of establishing a Community Land Trust, which would mean that the land would belong to the immediate neighbors, whether they rent or own their properties.

It turns out that an abandoned house once occupied the footprint of the community garden, until it burned to the ground. When Elizabeth first got her hands on the land – thanks to a Lunenfeld Beautification Grant – it was essentially dead. There were no ants, bees, or even worms when they dug up the soil. She knew that the refugee community wanted a place to gather and grow vegetables, so she began to test the soil for contaminants while hauling in compost. Today, the Upper 14th Street Block Club garden is flourishing – it has come alive with an assortment of plants and sunflowers. And it just so happens that sunflowers are perfect for phytoremediation, a process that helps to clean up any contaminants found in the ground. Elizabeth also conducts tests on the leaves of the sunflowers, to determine the safety of growing vegetables on the various plots.

Elizabeth, who is president of Upper 14Th Street Block Club and founder and executive director of the Kids Neighborhood Initiative, told me that the garden has now become a “safe place” in the neighborhood, where refugees gather together to reap and sow. There’s a tiny food pantry on the grounds. There’s also a place to post notices that are of importance to the families, which happen to speak 7 different languages. How else will they know about voting, or big garbage day, or any other important city occurrences that we all take for granted? Eventually, Jonathan’s dreams of creating a vibrant, safe, all-inclusive neighborhood began to steamroll, under Elizabeth’s guidance. This became crystal clear for me when Elizabeth invited me over to her house, which she once shared with Jonathan. The front yard is now a gated playground for the neighborhood children. The playground is centered around two small tire swings – one for the older kids, and one for the smaller kids. In the backyard, Elizabeth has converted her own garden shed into a neighborhood library. Off to the right of that is a chicken coop, where 14the street families collect eggs, and even butcher the occasional chicken. The chicken coop | The library shed with all donated books

As if that was not enough, Elizabeth’s helpful hands extend into her household. During my visit, one young refugee girl was taking a nap with Elizabeth’s dog, while a young boy was in a side room using her computer.

“I feed them too,” Elizabeth told me, as I attempted to wrap my brain around all of this. “There are 30 kids from the neighborhood that come over here to eat, play, study… it’s all part of Jonathan’s legacy. He was the most generous person. He would bring them food and clothes. Now, I’m just doing my part. I help the parents to translate their utility bills, or I tell them that they can vote, and how to vote. We celebrate birthdays here, and special occasions. I take them to community meetings and advocate for them. I’ve even taken them out for boat rides. Everything is for the families – I was a counselor before this… this is more impactful. None of these kids will drop out of school. All of the neighbors are helping now – it’s a real community.”

Last year, a neighborhood child was struck by a car and killed as he was walking to school. That’s when the refugee community came to Elizabeth and asked for help. “We applied for speed humps, but haven’t gotten them yet,” Elizabeth told me. “In the meantime, we’ve gone out and painted crosswalks at the intersections. Now other block clubs have reached out to ask for help. We’re in the process of purchasing a striping machine that we hope to keep at the Tool Library. Then, anyone will be able to borrow it. Then we should start seeing more striping all over the city.”

Beyond inviting neighbors to become part of her family, Elizabeth is always on the lookout for ways to enhance the quality of life for everyone around her. Whether its rallying people together to stripe a crosswalk, or strategically planting sunflowers that predict the safety of the soil, there’s always a project at hand.

And as you can see, Elizabeth has her hands full. At the same time, there’s so much more going on behind the scenes, that I can only imagine what her day-to-day looks like.

“It’s a permanent summer camp,” said Elizabeth [laughing]. “Except that there’s a rule (and a sign) about no screaming!”

Lead image: The shopping cart is used for transporting water from Elizabeth’s house to the community garden | Below are the results of the grassroots neighborhood street intersection striping In California, Abortion Could Become a Constitutional Right. So Could Birth Control.

IMPACT’s Bound for Glory set for 10/7 in Albany, New York