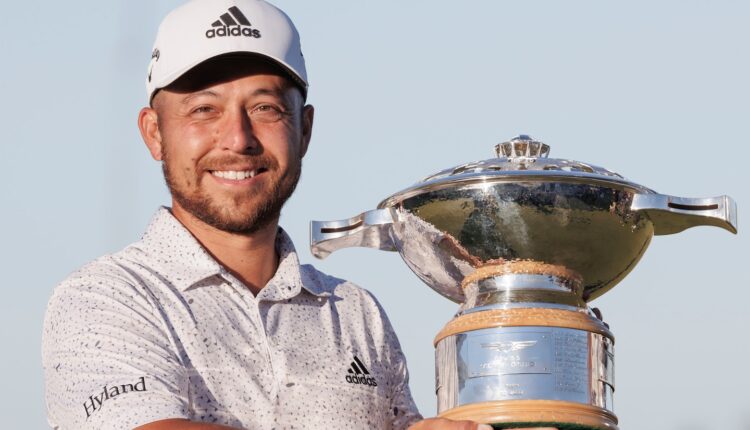 Winless for more than two years, Schauffele picked up his fourth victory in the last 12 months Sunday when he overcame a rough patch in the middle of his round with two key birdies and a par save for an even-par 70 to win the Scottish Open .

Next up is another test on Scottish soil, this one the purest of all, the British Open at St Andrews. Schauffele heads to the home of golf as among the hottest players in the world.

It was the first time the PGA Tour co-sanctioned a European tour event.

Schauffele has career titles on the PGA Tour. His 8-foot par save on the par-3 17th at The Renaissance Club gave him a two-shot lead, and the 28-year-old from San Diego played it smartly from there. He took iron off the 18th tee to avoid trouble and wound up missing an 8-foot par try.

The consolation for Kitayama was earning of three spots in the field at the British Open, his third straight time at golf’s oldest championship. The other two spots went to Brandon Wu and Jamie Donaldson, who tied for sixth.

NICHOLASVILLE, Ky. — Trey Mullinax won the rain-delayed Barbasol Championship for his first PGA Tour title, holing a 15-foot putt from the edge of the 18th green to beat Kevin Streelman by a stroke.

The 30-year-old Mullinax followed the breakthrough putt with a celebratory fist pump and scream. He played 33 holes Sunday at Keene Trace, competing a 5-under 67 in the delayed third round and following with a 66 to finish at 25-under 263.

Streelman’s hope of forcing a playoff ended when his 9-foot birdie putt rolled right. He settled for par and a 67.

Mullinax earned the last spot in the British Open at St Andrews, with that tournament starting Thursday. The former Alabama player also gets spots in the 2023 PGA Championship and Sentry Tournament of Champions.

The 55-year-old Stricker, also from Madison, matched Kelly with a 68. Sticker missed a chance for his second major victory of the season after taking the Regions Tradition in May in Alabama.

Lucy Li won the Twin Bridges Championship at Pinehaven in Albany, New York, for her second Eoson Tour victory of the season. The 19-year-old Li led wire-to-wire, closing with a 2-under 69 for a 10-under 203 total. Li, the youngest player to qualify for a US Women’s Open at 11 years, leads the tour’s money list with $107,241 — more than enough to wrap up an LPGA Tour spot for next season. Linnea Storm was second, four strokes back. … Carlota Ciganda completed a wire-to-wire victory in the Estrella Damm Ladies Open at Terramar in Sitges, Spain, for her sixth Ladies European Tour title. Also the 2019 winner, the Spanish player closed with a 2-under 70 to finish at 18 under. Scotland’s Laura Beveridge (66) was two strokes back. … Song Ga-eun won the Korean LPGA’s Daebo Ladies Open at Seowon Valley. She shot 62-68-68, finishing at 18 under for a three-stroke victory over Oh Ji-hyun. … Yuna Nishimura closed with a 2-under 70 for a one-stroke victory over Mao Nozawa in the Japan LPGA’s Nipponham Ladies Classic. Nishimura finished at 18-under 270 at Katsura. … England’s Nathan Kimsey won the Le Vaudreuil Golf Challenge in France for his first European Challenge Tour title, beating Frenchman Robin Sciot-Siegrist with a birdie on the fourth hole of a playoff. Kimset closed with a 1-under 71 to match Sciot-Siegrist (70) at 14-under 274. … James Kingston won the Swiss Seniors Open at Golf Club Bad Ragaz for his second Legends Tour title. The South African shot a 2-under 68 for a three-stroke victory over Phillip Price and David Shacklady. Kinston finished at 11-under 199.