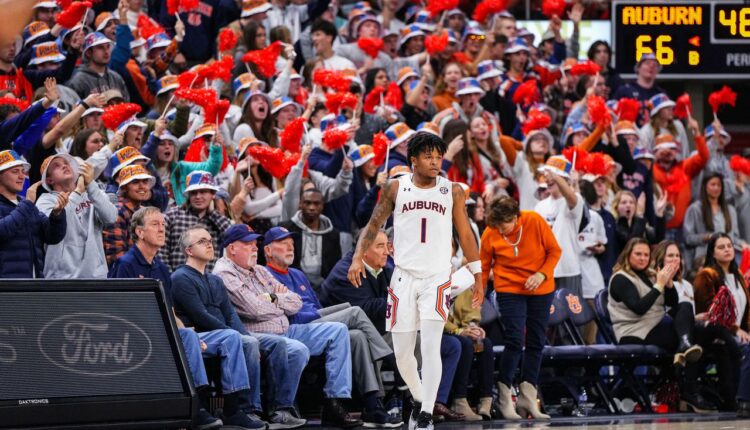 The SEC game is in full swing, and while the start of the NCAA tournament is still two months away, the back half of the schedule is already underway.

Auburn has played 17 of their 31 regular season games, and factoring in a potential SEC tournament run, it’s safe to say the Tigers are halfway through their season just before March Madness begins. Bruce Pearl’s team, which climbed to 16th in this week’s AP poll and set a school record for consecutive weeks in the top-25 (30+), sits at 14-3 overall and 4-1 in SEC play . The Tigers have won three straight games since an uneven month-long season and they are looking to continue capitalizing on a tough but opportunistic part of the schedule that began last week and included four of six games on the road — with three of them the next four team games away from Neville Arena.

For the rest of the season, AL.com will be snapping a weekly snapshot of Auburn’s NCAA tournament recap, with a look at the team’s tally by quadrant, as well as the latest predictions for the Tigers in the field of 68. Here’s where things stand in two months until the start of the NCAA tournament:

Auburn’s season at a glance:

SEC record: 4-1 (third in the league, behind undefeated Alabama and Texas A&M)

Record on the neutral side: 2-1

–The bracket matrix, which currently weights bracket projections from 73 different sources, currently has Auburn as the sixth best #6 in the field. The tigers appear on all 73 bracketed projections considered.

— ESPN’s Joe Lunardi projects Auburn as a six in the East Regional, with the Tigers taking on 11-seed Maryland in the opening round in Albany, New York. Lunardi’s projection was on January 13 (before Auburn defeated Mississippi State at Neville Arena).

– CBS Sports’ Jerry Palm predicts Auburn as a fiver in the West Regional, with the Tigers meeting 12-seeded Kent State in Orlando, Fla. in the opening round.

– Bracket WAG’s Shelby Mast has Auburn as a six in the West Regional, with the Tigers expected to face either Wake Forest or Iowa in the opening round.

— RealTimeRPI.com has predicted Auburn as a foursome in the East Regional, with the Tigers meeting Iona in the opening round in San Diego.

– SB Nation has projected Auburn as a fiver in the South Regional, with the Tigers meeting 12th-seeded Kent State in Greensboro, NC in the opening round. (The latest bracket from SB Nation was released last week).

— The NCAA’s Andy Katz projects Auburn in its first round of the season as a seventh in the West Regional, with the Tigers meeting the 10th-ranked College of Charleston in the opening round. (The Katz clip was published last week).

Tom Green is an Auburn beat reporter for the Alabama Media Group. Follow him on Twitter @Tomas_Verde.